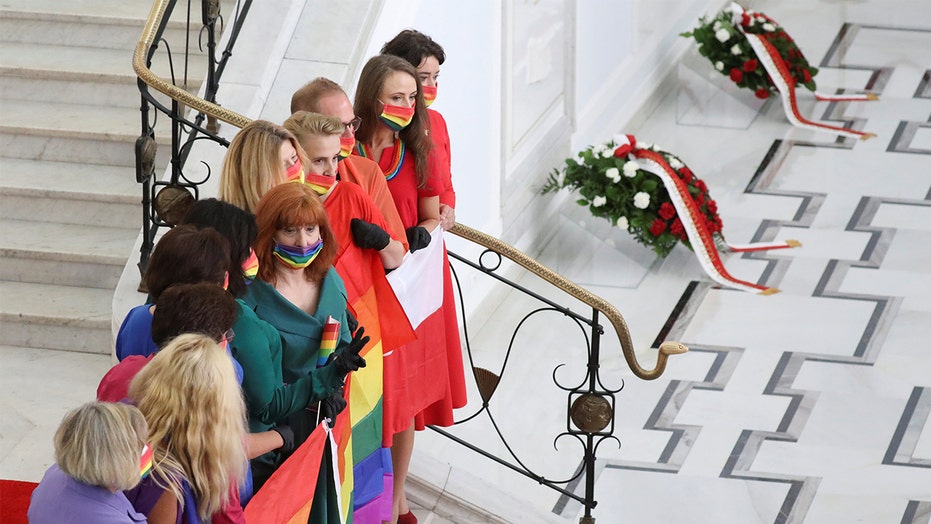 Members of Poland's parliament on Thursday used the swearing-in ceremony of President Andrzej Duda to make a political statement, forming a rainbow with their clothing to highlight accusations of homophobia against his campaign.

Duda referred to LGBT people as "an ideology" -- as opposed to individuals -- and was condemned by Poland's left-leaning politicians and international observers.

“We wanted to remind President Andrzej Duda that ... in the constitution there is a guarantee of equality for all,” Left MP Anna Maria Zukowska said, per Reuters.

In addition, the opposition leaders wore colored masks and sat in rows as Duda was officially sworn in. They reportedly posed for photos outside parliament with rainbow and Polish flags as well.

Members of parliament wearing rainbow-themed masks, representing the LGBT symbol, pose for a picture after the swearing-in ceremony of Andrzej Duda as Polish President in Warsaw, Poland August 6, 2020.  (Reuters)

“We don’t want a similar situation during his next term as there was during his campaign when the president dehumanized LGBT people by denying them the right to be people,” Zukowska said.

The conservative Duda, who will serve a second five-year term said, “The key things are family, security, work, investment and dignity," according to Fox 5. He referred to the family as “the highest good" and urged the country to "do everything to protect family and care for its development."

Duda added, “Every person is owed respect." He also said the government will "not make a division between better or worse Poles because of their earnings, their level of education, their views or their religion.”

The Associated Press spoke to several LGBT people who were considering moving due to the dramatic political swings over the last several years, but there are no official statistics on how many may have left the country.

Duda won a tight runoff race in July when he defeated liberal Warsaw Mayor Rafal Trzaskowski with 51 percent of the vote. Around 65 percent of eligible voters cast a ballot in the nation of 38 million," Fox 5 reported.

Despite some outside observers saying the elections did not meet democratic standards, the country's highest court upheld the election's results on Monday, paving the way for Duda's swearing-in.