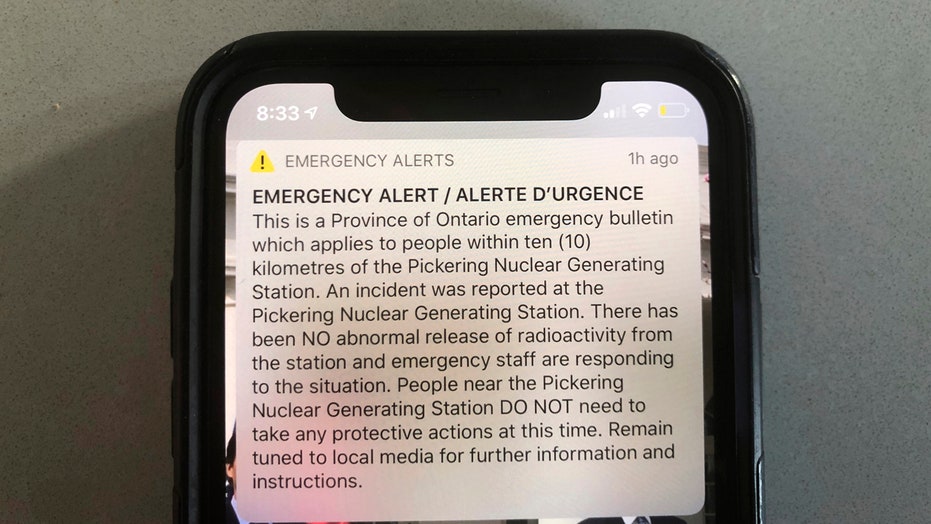 Residents across the greater Toronto area were jolted awake early Sunday by a mass mobile alert sent after an "incident" was reported at a nuclear power plant in Canada that turned out to be sent in error.

The government of Ontario sent out an emergency bulletin on cellphones around 7:30 a.m. ET about the "incident" at the Pickering Nuclear Generating Station in the town of Pickering along Lake Ontario, located about 26 miles northeast of downtown Toronto.

“There has been NO abnormal release of radioactivity from the station,” the alert read. “People near the Pickering Nuclear Generating Station DO NOT need to take any protective actions at this time.”

The emergency alert applied for people within 6.2 miles of the power plant but many in the greater Toronto area received the message.

An emergency alert issued by the Canadian province of Ontario reporting an unspecified "incident" at a nuclear plant is shown on Sunday. (AP Photo/Robert Gillies)

"Does anyone [have] any more news on this #Pickering nuclear issue?? Kind of strange “emergency message” across all of Ontario - but, the message says that there’s nothing to be worried about," Matthew Slutsky tweeted. "If I lived in Pickering, I think I’d be in my car already heading out of town."

About an hour minutes after the initial alert was sent, Ontario Power Generation clarified on Twitter that the message regarding Pickering Nuclear was "sent in error." The notification message also was pushed onto to television screens, according to the Associated Press

"There is no danger to the public or environment," the agency said.

"Like many of you, I was very troubled to have received that emergency alert this morning. While I am relieved that there was no actual emergency, I am upset that an error such as this occurred. I have spoken to the Province, and am demanding that a full investigation take place," Ryan said by Twitter.

Toronto Mayor John Tory joined him, tweeting that “there are far too many unanswered questions" and noting it went out province-wide.

The incident in Canada happened nearly two years to the date that officials in Hawaii mistakenly warned the public about a nonexistent incoming ballistic missile.

The U.S. Department of Homeland Security’s inspector general recommended changes to the emergency alert system in the United States after the incident on Jan 13, 2018. A Hawaii Emergency Management Agency employee sent the missile alert to cellphones and broadcasters, triggering panic until the agency sent another message 38 minutes later notifying people it was a false alarm.

Many across the greater Toronto area voiced concerns after receiving the alert, with some referencing the Chernobyl disaster. Jim Vlahos, a 44-year-old father of two in Toronto, the Associated Press woke up to the alert and quickly made a hotel reservation more than 60 miles away in Niagara Falls. He said he figured he'd go as far west as possible and then cross the border.

“Having watched “Chernobyl” didn’t help," he said, referring to the HBO show about the 1986 nuclear disaster in the Soviet Union. "The lack of communication following the alert didn’t help either," he said. “I have no problem leaving my phone on for these types of alerts, but I would expect some more info from the government so I wouldn’t have to overreact the way I did."

Others took aim at the plant that's set to be decommissioned, saying Pickering "is past it’s best."

"Looks like a lot of us in the GTA/Ontario woke up to a reminder that we have a fricking nuclear plant on the shore of one of the largest bodies of fresh water in the world," Jane Cawthorne tweeted. "Like that was ever a good idea."

The power plant, run by Ontario Power Generation, has been in service since 1971 and is slated to be decommissioned in 2024, according to CP24. Pickering generates 14 percent of Ontario's electricity, and is responsible for 4,500 jobs across the region, according to Ontario Power.

The nuclear plant has experienced several earlier incidents. In 2011, a pump seal failure caused the spill of more than 19,200 gallons of demineralized water into Lake Ontario, though with no significant risks to public health, according to local authorities.

The Pickering Nuclear Generating Station is due to be decommissioned in 2024. (Google Street View)

In 1994, the plant automatically shut down after a faulty valve caused 132 tons of heavy water to spill. It was the first time a Canadian nuclear reactor had to use the emergency core cooling system to prevent fuel overheating.