Palestinian Leader: Israel Must Choose Between Peace or Settlements 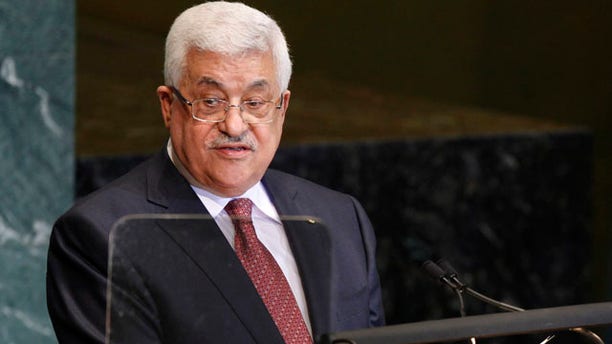 UNITED NATIONS — Palestinian President Mahmoud Abbas said Saturday there will be no peace deal with Israel unless the Jewish state stops settlement construction in areas the Palestinians claim for their future state.

"Israel must choose between peace and the continuation of settlements," Abbas said in his address to the U.N. General Assembly's annual ministerial meeting.

Direct peace talks between Israel and the Palestinians stalled only three weeks after starting in Washington in early September over the impending end of a 10-month freeze on new Israeli settlement construction on land claimed by the Palestinians.

Abbas reaffirmed the Palestinian commitment to try to reach a peace deal.

"We have decided to enter into final status negotiations. We will continue to exert every effort to reach an agreement for Palestinian-Israeli peace within one year in accordance with resolutions of international legitimacy ... and the vision of the two-state solution," Abbas told ministers and diplomats.

But with a Sunday deadline looming for Israel to resume the contested building, the Palestinians are waiting for U.S. efforts to break the impasse. President Barack Obama has increasingly placed efforts to resolve the conflict at the center of his foreign policy, but both Israeli and Palestinian officials said Saturday a deal was far from certain.

"We remain engaged with both sides," he said.

Earlier, Crowley said, "We are doing everything we can to keep the parties in direct talks."

In his U.N. speech, Abbas said, "Our demands for the cessation of settlement activities, the lifting of the siege (of Gaza) and an end to all other illegal Israel policies and practices do not constitute arbitrary preconditions in the peace process."

These are past obligations that Israel is required to implement, he said, and Israel's implementation "will lead to the creation of the necessary environment for the success of the negotiations."

He said the Palestinians and the wider Middle East are continuously pushed into "the corner of violence and conflict" as a result of Israel's "mentality of expansion and domination."

The Palestinian president demanded an end to Israel's repeated flouting of U.N. resolutions, its destruction of the historical identity of Jerusalem, and its blockade of the Gaza Strip which he said has created massive suffering for the people living there and prevented reconstruction.

On the settlement dispute, some in Israel have proposed, for example, that limited building will resume but not the relatively unfettered construction that prevailed before the Israeli moratorium.

Palestinians say it is essential that Israel leave the restrictions on settlement construction in place.

Abbas has repeatedly warned that he will be forced to walk away from the direct negotiations if construction resumes.

The Palestinians claim all of the West Bank, home to 300,000 Jewish settlers, as part of a future state, and say that by expanding settlements, Israel is imposing facts on the ground that make it increasingly difficult to establish a viable country.

At the same time, Israeli Prime Minister Benjamin Netanyahu faces heavy pressure within his pro-settler governing coalition to resume construction. Hardline elements in the coalition could try to bring down the government if Netanyahu extends the settlement slowdown.

Pro-settler activists hauled bulldozers, cement mixers and other construction equipment into the Revava settlement in the northern West Bank on Saturday. Danny Danon, a pro-settler lawmaker in Netanyahu's Likud Party, said activists would lay the cornerstone for a new neighborhood on Sunday, the last day of the slowdown, and planned additional construction Monday after the restrictions formally end.

In his U.N. address earlier this week, Obama called on Israel to extend the moratorium, saying it "has made a difference on the ground and improved the atmosphere for talks."

The Quartet of Mideast peacemakers -- the U.S., U.N., European Union and Russia -- made a similar plea to extend the moratorium.

"Restoring the credibility of the peace process requires compelling the government of Israel to comply with its obligations and commitments," Abbas said, "particularly to cease all settlement activities in the occupied Palestinian territory, especially in and around East Jerusalem, as well as the dismantling of the annexation apartheid wall."

The Palestinians claim East Jerusalem as the capital of a future state. They also object to the separation barrier built by Israelis between the West Bank and Israel to prevent deadly suicide bombings. Some parts of the barrier cuts into Palestinian territory, leaving almost 10 percent of the West Bank on the Israeli side.

The Palestinians themselves are bitterly divided between Abbas' Fatah movement, which governs the West Bank, and the Hamas rulers of Gaza, a coastal strip seized by the Islamic militant group three years ago. Hamas doesn't recognize Israel and has denounced the U.S.-backed peace talks as illegitimate.