Ongoing troubles with India in Kashmir threaten Pakistan's attention and considerable influence in a potential peace agreement aimed at ending an 18-year conflict involving U.S. and Taliban forces in Afghanistan, according to the Pakistani U.N. ambassador.

“The current crisis between Pakistan and India will obviously mean that Pakistan will have to put its full focus on its eastern border and it could affect what it is trying to do on the front with Afghanistan,” Pakistan’s Permanent Representative to the United Nations, Maleeha Lodhi, told Fox News on Friday. “In other words, our full focus is going to be on the eastern frontier rather than the western front and that could affect the peace process. Our attention is going to be where we feel there is a military threat to us.”

And Pakistan believes that threat is from the Indian border, Lodhi emphasized.

“Both (Afghanistan) and (Kashmir) issues are important in their own right. But it is the eastern border, India, which has already attacked Pakistan. They sent planes into our territory. That’s a hot border,” she said. “Afghanistan is a different situation. We would like that war to end. But we don’t perceive a threat from our western border. It’s our eastern border that we perceive a threat.” 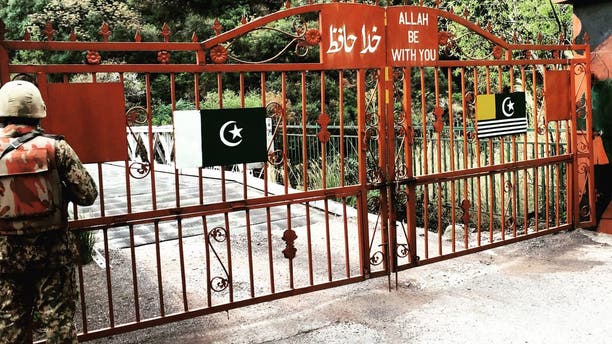 At the gates on the Pakistan side of the Indian border in Jammu and Kashmir, known as the "Line of Control" (LOC) (Fox News/Hollie McKay)

Pakistan on Friday fulfilled its pledge to hand over the Indian pilot who was downed amid the escalating military tensions between the two countries last week. Pakistan viewed the release as a “gesture of peace,” which they claim has not been reciprocated. Shelling and cross-border violence continued over the weekend, leaving at least eight dead.

“We are in the midst of a very tense situation, a very fraught situation,” Lodhi continued. "The Indian leadership is failing to respond to the Prime Minister's repeated gestures (for peace),  which included the gesture of freeing and releasing the Indian pilot who was flying his plane to attack Pakistan."

The unrest in Kashmir was re-ignited on Feb. 14, after a suicide bombing killed more than 40 Indian paramilitary troops in Kashmir. India retaliated with airstrikes, and has made clear it will take an aggressive approach to combat terrorism in the disputed region.

Indian bombers on Tuesday struck a hilly area close to the Kashmir border, with New Delhi claiming to have killed an active militant training camp, where some 300 alleged terrorists were training. But Pakistan insists there were no camps in the area, and no evidence of casualties, other than an elderly villager believed to have been wounded. 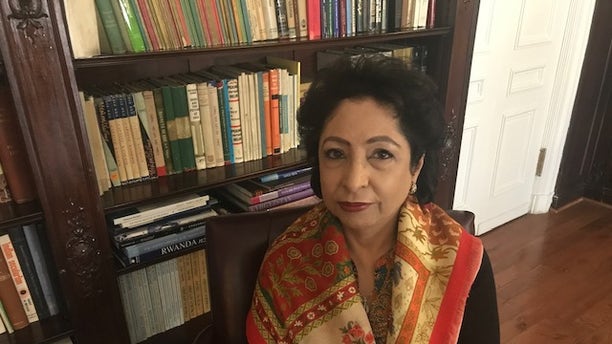 Jammu and Kashmir is a picturesque terrain, framed by the Himalayan mountains. But it’s also a contentious and disputed region marred by a long history of bloodshed, four wars, frequent skirmishes, and a revived fear that tit-for-tat fighting between the two could lead to a nuclear showdown.

The fight for Kashmir remains one of the longest-standing military conflicts in the world, dating back to 1947. After Hindu-majority India and Muslim-dominant Pakistan were granted independence from Britain, the two countries have battled for control of the disputed area.

Both countries today possess an arsenal of more than 100 nuclear warheads, raising concerns in the international community about what might happen if the situation between the two countries deteriorates. 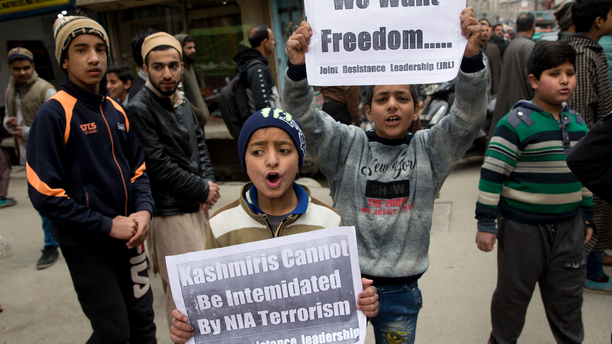 Kashmiri children hold placards and shout freedom slogans in Srinagar, Indian controlled Kashmir, Friday, March 1, 2019. India has banned Jama'at-e-Islami, a political-religious group in Kashmir, in a sweeping and ongoing crackdown against activists seeking the end of Indian rule in the disputed region amid the most serious confrontation between India and Pakistan in two decades. (AP Photo/ Dar Yasin)

“The Kashmir dispute has been a frozen conflict for decades. They (India and Pakistan) are both to blame but in different ways,” said Parag Khanna, founding partner of FutureMap and author of “The Future is Asian.” “India for failing to credibly enfranchise and incorporate Kashmiris, Muslims or otherwise, and Pakistan for continuing to harbor Kashmiri separatist militants and fundamentalist groups for conducting cross-border attacks with impunity.”

Indian officials have for decades tried to suppress the separatist insurgency, which gained momentum in the late 1980s with the backing or at least the quiet acceptance of Pakistan, according to many observers in the international community. Pakistan has denied such accusations and consistently accuses India of committing mass human rights violations against the Kashmiri population.

India has asked Pakistan “over and over” to hand over actionable intelligence pointing to specific terrorist groups in the region. Some information has been passed along in recent days, and India is currently evaluating that information for certifiable proof of militant activity.

“But simply to hurl allegations because of your own failure is not a responsible way to act,” Lodhi charged. “Nor does it bring peace to our region.”

While analysts have contended progress in India-Pakistan relations would bolster Pakistan’s position in assisting the U.S.’s goal of squashing extremism in both Afghanistan and Pakistan and bring stability to the wider region, some Pakistan critics claim that Afghanistan’s peace process – which will likely entail a U.S troop withdrawal – could actually then put the militant’s spotlight back on India, and re-ignite a dangerous new phase of the old war. 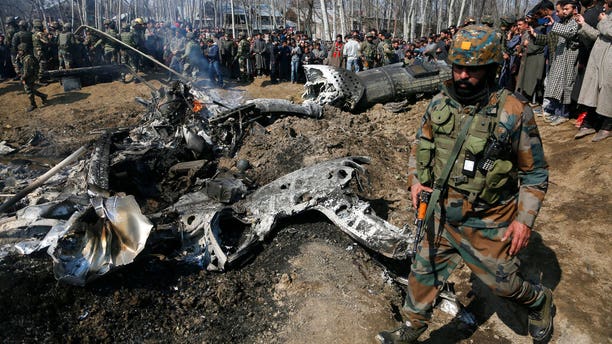 An Indian army soldier walks past the wreckage of an Indian aircraft after it crashed in Budgam area, outskirts of Srinagar, Indian controlled Kashmir, Wednesday, Feb.27, 2019. (AP Photo/Mukhtar Khan)

According to many Afghan officials, “Kashmiri militants have always been recruited by Pakistan to fight against the government in Afghanistan,” which itself is to blame for prolonging the war. "If U.S. and NATO troops withdraw from Afghanistan, it will be a big victory for terrorism, and the condition in the Kashmir will worsen because then all the terrorist activities will be focused there,” contended Col. Ahmad Muslem Hayat, a former Afghan military attaché in London.

A spokesperson for the US State Department said Monday that the United States policy on Kashmir has not changed.

"The pace, scope, and character of any discussions on Kashmir is for the two sides to determine, but we support any and all positive steps India and Pakistan can take to forge closer relations," said the representative.

Representatives for India’s embassy and U.N. Mission, as well as those for Afghanistan, did not immediately respond to a request for comment.