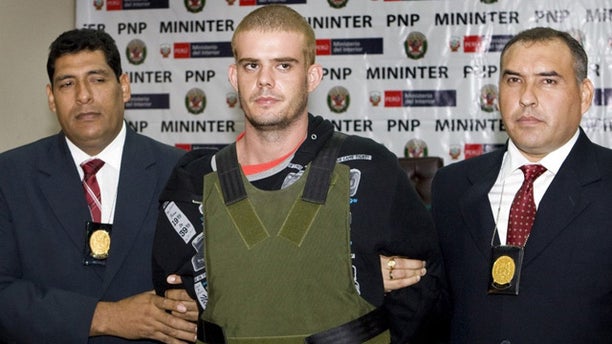 June 5: Joran van der Sloot is escorted by Peruvian police as he arrives at their offices in Lima. (AFP/Getty Images)

"He let slip that he knew the place where this person was buried," Gen. Cesar Guardia told The Associated Press.

Guardia said, however, that the 22-year-old Dutchman told investigators "he would only testify (on the matter) before Aruba authorities."

Guardia said that he didn't know how seriously to take Van der Sloot's statement given his history of dubious statements about the 2005 disappearance in Aruba of the Alabama teen.

Van der Sloot remains the lone suspect in the case, which came up in front of Peruvian police as the Dutchman confessed to killing Stephany Flores, a 21-year-old woman from Lima, Guardia told the AP.

Sheathed in a bulletproof vest, Van der Sloot was moved Thursday across downtown Lima to a cell at the prosecutor's office as officials prepared to file charges in the May 30 killing of Flores, who police say he met playing poker at a casino three days earlier.

Flores was killed five years to the day after Holloway disappeared and prosecutors have until Saturday to file charges in the case.

Van der Sloot's newly hired attorney asked a judge Thursday to declare his client's confession void on the grounds he made it in the presence of a defense lawyer appointed by police.

The attorney, Maximo Altez, could not be reached directly for comment. A person answering his cell phone identified himself as the lawyer's secretary and said Altez was unavailable. Later calls went unanswered.

Guardia dismissed the defense claim, calling the confession wholly admissible in court. In addition to the government-appointed defense attorney, he said, a translator assigned by the Dutch Embassy was present at Monday's confession.

"The incriminatory elements were so powerful that he had to confess," Guardia said, adding that the evidence included blood stains found on Van der Sloot's clothing.

If tried and convicted on murder charges, Van der Sloot would face from 15 to 35 years in prison.

Guardia said Peruvian interrogators had restricted their questioning to the death of Flores, the daughter of a circus promoter and former race car driver.

The May 30, 2005 disappearance of Holloway on the Dutch Caribbean island remains unsolved.

Efforts by the FBI to try to solve it may have inadvertently helped fund the travel that enabled the murder of Flores in Van der Sloot's hotel room.

Believing it was closing in on Van der Sloot, the FBI videotaped and allowed him to be paid $25,000 in a sting operation in Aruba last month. But it held off on arresting him, and he took the money and flew to Peru.

Guardia told the AP in an interview that the 6-foot-3 (190-centimeter-tall) Van der Sloot impressed investigators with both his intelligence and brutality.

He said the husky Dutchman grabbed Flores and smashed her with an elbow before strangling her and throwing her to the floor of his room.

Guardia said Van der Sloot attested to killing Flores because she found out about the Aruba case by using his laptop without his permission while went out for coffee.

But he said police do not necessarily believe him and think he may have killed Flores before going out and returning to the hotel room with two cups of coffee and rolls.

Col. Miguel Canlla, chief of homicide investigations, told the AP that Van der Sloot took off his shirt after strangling Flores and put it on her. He said the Dutchman wanted to put her body into a suitcase but couldn't.

"He is cold, calculating and cynical," Canlla said.

Security camera video from the Atlantic City early on the morning of her death shows Flores arriving at a poker table where Van der Sloot is sitting with other players, shaking his hand as if they met before and then taking the seat next to him. The two later leave together.

Van der Sloot confessed, police say, on his third full day in police custody and a full week after he fled into northern Chile.

He was charged with extortion in the United States on June 2 -- the day of his arrest in Chile -- in a case the commenced after Van der Sloot contacted John Kelly, a New York lawyer for Holloway's mother, Beth Twitty, in April, according to an affidavit.

The Dutchman allegedly was seeking $250,000 in exchange for the location of the young woman's body, how she died and the identity of those involved.

Van der Sloot's father died in February and he "wanted to come clean, but he also wanted money," said Bo Dietl, a private investigator who worked with Kelly on the case.

After consulting with Twitty, Kelly contacted the FBI.

Van der Sloot was told he would get $225,000 once the body was found, Dietl said. According to the affidavit, Van der Sloot insisted that a written contract be signed between him and Twitty.

Van der Sloot was secretly videotaped by the FBI in an Aruba hotel telling Kelly he pushed Holloway down, that she hit her head on a rock and died, the affidavit says. He said he then contacted his father, who helped him bury the body.

Kelly and Van der Sloot went to where the Dutchman said he and his father had put Holloway -- in the foundation of a house.

No body has been found, however.

And the affidavit says Van der Sloot admitted in a May 17 e-mail -- he was in Peru by then -- that he had lied about the location of Holloway's remains.

It was not the first time Van der Sloot has admitted to having lied about the case. Several times, he made confessions he later retracted.

Van der Sloot was the last person seen with Holloway before the girl vanished on the last night of a high school graduation trip.

He was arrested twice but released both times for a lack of evidence.