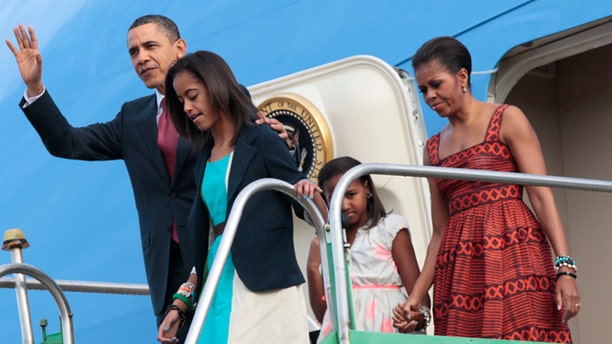 March 19: President Obama and the First Family emerge from Air Force One after arriving in Brasilia, Brazil. (AP)

Seeking to link his Latin American tour to job growth back home, President Obama said Saturday the U.S. was eager to sell its goods and services to economically booming Brazil's growing middle class. The president's economic message, however, was overshadowed by events in Libya, where a western coalition launched a risky offensive against Muammar al-Qaddafi.

"As the United States looks to Brazil, we see the chance to sell more goods and services to a rapidly-growing market of around 200 million consumers," Obama said. "For us, this is a jobs strategy."

Executives from a number of American corporations, including International Paper, Cargill, Citigroup and Coca-Cola, participated in the CEO session.

Obama began his three-country, five-day tour of Latin America against the backdrop of ominous developments in earthquake-ravaged Japan, where officials struggle to prevent a meltdown at a damaged nuclear power plant, and in Libya, where a U.S. and European coalition launched a risky military operation to protect civilians from attacks by Gadhafi's force.

Brazil stands out for its strategic and economic importance to the United States. As the world's seventh-largest economy, it is a member of an exclusive club of influential developing nations along with Russia, India and China, collectively known in economic circles as the BRIC nations. Obama is looking to reset the U.S. relationship with Brazil, an emerging economic power that even without being hostile has annoyed Washington with its independent ways.

She said that of all U.S. presidents who have visited Brazil, "You are the one that sees our country in the most vibrant moment."

Still, Rousseff made no effort to hide her frustration with the resistance Brazil has faced in becoming a permanent member of the United Nations Security Council and appealed for Obama's help in making needed changes at the U.N. She also chafed at US. policies that have imposed tariffs on Brazilian goods, including ethanol and cotton, and appealed for concrete action to improve the economic ties.

"In the past this relationship was overshadowed by empty rhetoric," she said.

Obama began his Latin America trip on schedule, despite ominous developments in earthquake-ravaged Japan, where officials struggle to prevent a meltdown at a damaged nuclear power plant, and in Libya, where a U.S. and European coalition launched a military operation to protect civilians from attacks by Gadhafi's force.

Obama left Washington just hours after the coalition agreed to use all necessary measures to stop Gadhafi, raising the prospect that he would have to authorize military action from a foreign land. Leaders from the Arab world, the United States and other Western powers were holding emergency talks in Paris on Saturday over possible military action as Gadhafi's troops swarmed into the one-time rebel stronghold of Benghazi.

Obama said Saturday that the United States and its allies are prepared to act with urgency.

"Our consensus was strong, and our resolve is clear. The people of Libya must be protected, and in the absence of an immediate end to the violence against civilians our coalition is prepared to act, and to act with urgency," Obama said.

Air Force One touched down in Brasilia in an early-morning mix of sunshine and raindrops with the president, Michelle Obama, and daughters Sasha and Malia aboard. Several hours later the president and Mrs. Obama met with Rousseff at the presidential palace in an elaborate arrival ceremony featuring color guards and children waving American and Brazilian flag.

The Obamas were to depart for Rio de Janeiro Saturday night. After Brazil, Obama travels to Chile, which has established itself as one of the wealthier nations in South America. His third and final stop is in El Salvador.

Obama's stop in Brazil represents a chance to engage with Rousseff and get a firsthand assessment of what administration officials believe is her practical approach to governance and foreign relations after eight years of the flamboyant Luiz Inacio Lula da Silva, commonly known as Lula.

But as Obama and Rousseff were poised to meet, a disagreement between their administrations had already changed the dynamic of the trip. The Brazilian leader did not want to have reporters ask the two presidents questions -- after the White House had already promised a news conference -- so that event was scrapped. The two leaders instead issued statements.

A spokesman at the Brazilian presidential palace, who declined to be identified in line with internal regulations, said he did not know why no questions would be taken.

Rousseff, unlike her charismatic predecessor Silva, who spoke with the news media nearly every day, has rarely given news conferences in her three months in power and almost never gives interviews. During her campaign for the presidency last year she often seemed uncomfortable in public and was criticized for a mechanical speaking style.

The trip comes as China has surpassed the United States as Brazil's top trading partner and in the wake of recent discoveries of vast oil reserves off the Brazilian coast. The reserves -- estimated at between 30 billion and 80 billion barrels -- place Brazil in the top 10 countries in the world in reserves. Since Brazil is energy self-sufficient, that oil would all be available for export.

Brazil is also a giant agricultural exporter, competing head-to-head with the United States.