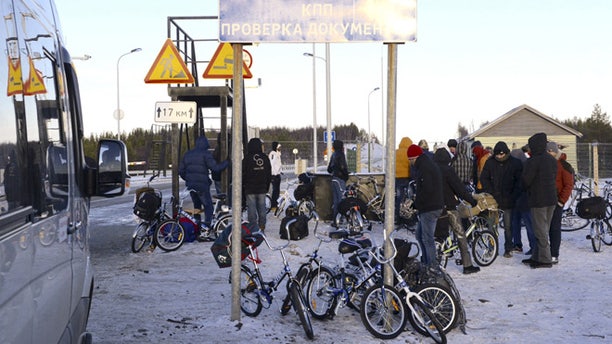 Oct. 30, 2015: Refugees and migrants gather near a check point on the Russian-Norwegian border. (REUTERS/Fyodor Porokhin)

Norway is offering asylum seekers thousands of dollars to leave the country as the global refugee crisis intensifies, and hundreds of people have taken the government up on its offer, The Local reports.

A family with two children is eligible for up to $9,300 dollars – and free flights home, the Norwegian Directorate of Immigration told the media outlet. More than 900 people reportedly have accepted.

“[Refugees] thought that when they came to Norway they would get protection rather quickly,” the head of The Norwegian Directorate of Immigration’s return unit told local broadcaster NRK, The Local adds.

Instead, applications for family reunification can often take years, and an increasing number of refugees fleeing conflict in the Middle East and Africa don’t want to wait.

“Earlier this year, the number [of applications] was an average of 100 per month. In October, there were 150 and in November there were 230 applications,” the International Organization for Migration spokesman Joost van der Aalst told NRK, The Local reports.

Housing-related challenges in Norway are also discouraging refugees from staying, as many find themselves in remote communities where work is difficult to procure, The Local adds.

The Norwegian Directorate of Immigration has said it may be necessary to cut the amount of economic support offered to asylum seekers in the future.

Refugees whose asylum applications have been denied also have the opportunity to apply for financial assistance to return home.