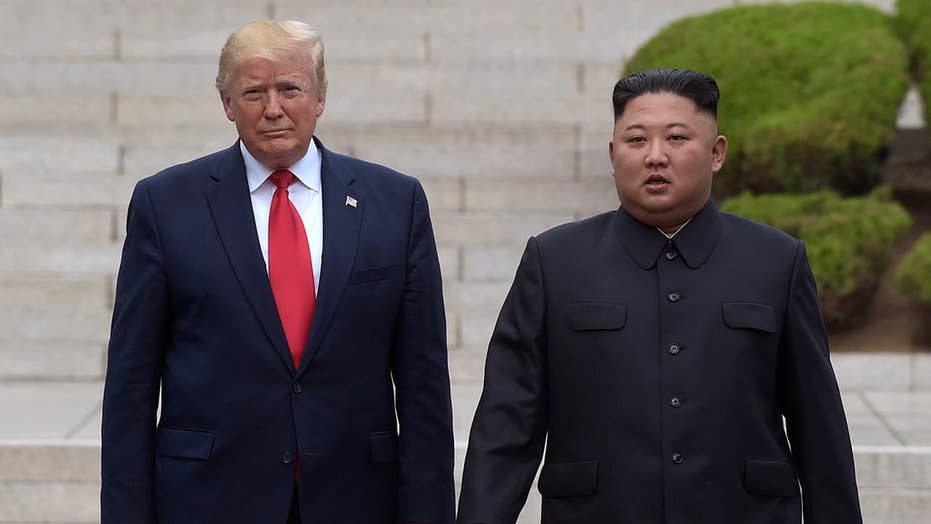 PYONGYANG, North Korea — North Korea on Tuesday suggested it might call off its 20-month suspension of nuclear and missile tests because of summertime U.S.-South Korean military drills that the North calls preparation for an eventual invasion.

The statement by the North's Foreign Ministry comes amid a general deadlock in nuclear talks, but after an extraordinary meeting of the U.S. and North Korean leaders at the Korean border raised hopes that negotiations on the North's growing nuclear and missile arsenal would soon resume.

The statement serves as a reminder of North Korea's longstanding antipathy toward U.S.-South Korean military cooperation, which the allies call defensive and routine but the North sees as hostile. It also ramps up the pressure on the United States going into any new round of talks.

At the dramatic June 30 meeting between North Korean leader Kim Jong Un and U.S. President Donald Trump, Trump crossed the border dividing the North and South, becoming the first sitting U.S. president to set foot in North Korean territory. The leaders agreed in closed-door talks to resume nuclear diplomacy that had been stalled since their failed second summit in Vietnam in February.

Despite the seeming mini-breakthrough, there has been little public progress since. North Korea wants widespread relief from harsh U.S.-led sanctions in return for pledging to give up parts of its weapons program, but the United States is demanding greater steps toward disarmament before it agrees to relinquish the leverage provided by the sanctions.

Amid the diplomatic jockeying, North Korea said Tuesday that upcoming regular summertime U.S.-South Korean military drills are forcing it to rethink whether it should be committed to the promises it has made to the United States. It cited its moratorium on nuclear and missile tests and other steps aimed at improving ties with Washington.

The statement said Trump vowed to suspend military drills with South Korea during his first and third meetings with Kim, but the planned summertime drills with Seoul and the deployment of weapons in the South show that Washington is not fulfilling that promise.

"With the U.S. unilaterally reneging on its commitments, we are gradually losing our justifications to follow through on the commitments we made with the U.S. as well," said the statement, carried by the North's official Korean Central News Agency.

It also said it is not bound by any legal documents to suspend its nuclear and missile tests.

Later Tuesday, North Korea's Foreign Ministry issued another statement warning that it will wait to see if the U.S.-South Korea military drills take place as planned to decide on the fate of North Korea-U.S. nuclear diplomacy.

South Korea's National Intelligence Service, the country's main spy agency, told lawmakers in a private briefing Tuesday that there were no suspicious activities at North Korea's main long-range rocket launch site in the northwest and its missile research center on the outskirts of Pyongyang, according to Kim Min-ki, one of the lawmakers who attended the briefing.

Outside experts say North Korea has suggested that it could further put off or cancel the resumption of nuclear talks if the United States doesn't offer to accept its calls for a slow, step-by-step nuclear disarmament process or widespread sanctions relief. But some analysts say North Korea will eventually return to the talks because Kim wants cooperation with outside powers as part of a plan to revive his country's troubled economy.