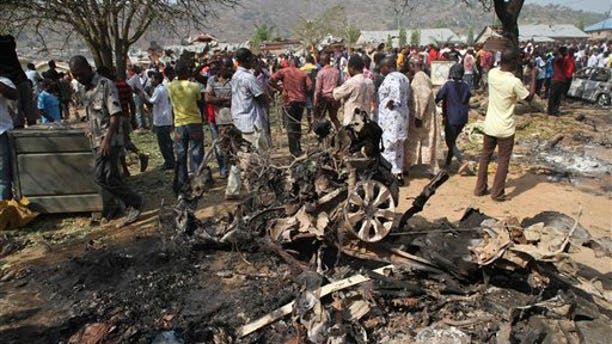 Dec. 25, 2011: Onlookers gather around a car destroyed in a blast next to St. Theresa Catholic Church in Madalla, Nigeria after an explosion ripped through a Catholic church during Christmas Mass near Nigeria's capital. (AP)

A radical Muslim sect attacked a church during a worship service in Nigeria's northeast during assaults that killed at least 15 people, authorities said Saturday, as Christians vowed to defend themselves from the group's widening sectarian fight against the country's government.

The attacks by the sect known as Boko Haram come after it promised to kill Christians living in Nigeria's largely Muslim north, exploiting long-standing religious and ethnic tensions in the multiethnic nation of more than 160 million people. The pledge by the leader of an umbrella organization called the Christian Association of Nigeria now raises the possibility of retaliatory violence.

In the last few days alone, Boko Haram has killed at least 44 people, despite the oil-rich nation's president declaring a state of emergency in regions hit by the sect.

Speaking Saturday to journalists, Pastor Ayo Oritsejafor, president of the Christian Association of Nigeria, vowed the group's members would adequately protect themselves from the sect. He declined to offer specifics, raising concerns about retaliation.

"We have decided to work out means to defend ourselves against these senseless killings," Oritsejafor said.

At a nearby beauty salon, at least three others were killed in a similar attack.

"Three gunmen with their faces covered with black cloth burst into my salon and started shooting at customers, chanting, 'God is great, God is great,"' said Stephen Tizhe, 35.

Responding to the violence, Adamawa state Gov. Murtala Nyako ordered a 24-hour curfew through the rural state. The violence comes ahead of a planned gubernatorial election later this month.

In the town of Potiskum in Yobe state, gunmen set two banks ablaze with gasoline bombs, starting a gunfight with police that lasted three hours, local police commissioner Tanko Lawan said. At least two people were killed in the fight, he said.

No arrests have been made in any of the attacks, authorities said.

In a statement Friday to The Daily Trust, the newspaper of record in Nigeria's north, a Boko Haram spokesman using the nom de guerre Abul-Qaqa claimed responsibility for the attacks in Gombe and Mubi.

"We want to prove to the federal government of Nigeria that we can always change our tactics," the spokesman said.

Boko Haram, whose name means "Western education is sacrilege" in the local Hausa language, is responsible for at least 510 killings last year alone, according to an Associated Press count. It has targeted churches in the past in its campaign to implement strict Shariah law across Nigeria.

The group claimed responsibility for attacks that killed at least 42 people in a Christmas Day strikes that included the bombing of a Catholic church near Abuja. The group also claimed an August suicide car bombing that targeted the U.N. headquarters in the capital, killing 25 people and wounding more than 100.

Nigeria's central government has been slow to respond to the sect. On Dec. 31, President Goodluck Jonathan declared regions of Borno, Niger, Plateau and Yobe states to be under a state of emergency, meaning authorities can make arrests without proof and conduct searches without warrants. He also ordered international borders near Borno and Yobe state to be closed.

However, the areas where the recent church and town hall attacks happened are not in the areas marked by the president.

Boko Haram promised to begin attacking Christians in Nigeria's north several days before the recent violence. The new killings have sparked fears among Christians living in the north about the group and caused some to flee. There also has been at least one report of retaliatory violence against Muslims living in Nigeria's mostly Christian south in recent days as well.