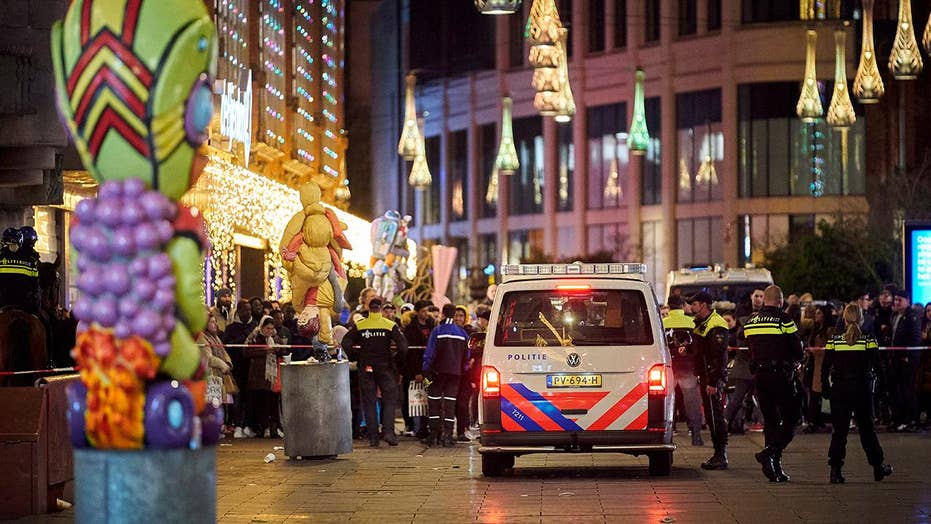 Authorities say at least three people were injured in a stabbing in The Hague's main shopping street.

Dutch police say three people were injured in a stabbing in The Hague, Netherlands, on Friday night. The attack comes just hours after a separate stabbing episode in London, where police have since said two of the injured have died.

The Netherlands stabbing took place in The Hague's main shopping street, which was bustling with holiday shoppers, according to police. The motive is unknown at this time.

Authorities said they were searching for at least one suspect. The Hague police said in an earlier statement that they were looking for a man in a grey jogging suit who was about 45 to 50 years old.

A Dutch police officer secures a bag with items from the scene of a stabbing incident in the center of The Hague, Netherlands. (AP Photo/Phil Nijhuis)

Additional details were not immediately available. Police spokeswoman Marije Kuiper told The Associated Press it's unclear if the incident was an act of terrorism and it's too early to determine a motive for the attack.

Officials said the three victims -- all minors -- were released from the hospital late Friday. It was unclear whether they had been stabbed by the suspect or might have been hurt when the crowds of people panicked.

A similar stabbing took place in Amsterdam a year ago, when two Americans were injured in a knife attack that prosecutors said had a "terrorist motive."

Dutch police blocked a shopping street after a stabbing incident in the center of The Hague, Netherlands, on Friday. (AP Photo/Phil Nijhuis)

As of the time of publication, it was also unknown if the Friday attack had any relationship to the earlier stabbing in London, which authorities say is being treated as a terrorist attack.

British police said two people are dead after being injured in the attack; three others are being treated at a hospital.

British police shot and killed the suspected terror attacker on the London Bridge. He was wearing a fake explosive vest and had been tackled by members of the public before being shot by London police, officials said.

British media outlets including the BBC and Sky News said the attacker was an ex-prisoner with links to Islamic extremist groups, but officials would not confirm those details.