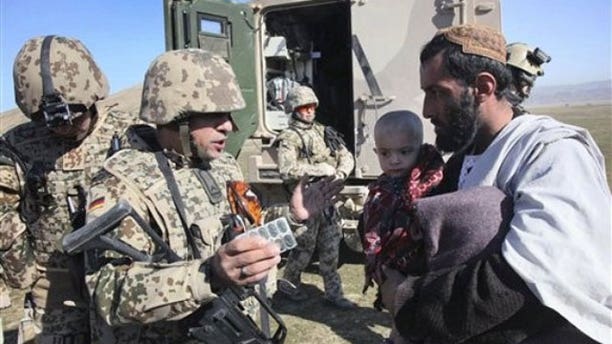 January 28, 2012: A German medic and soldier, center, part of a mobile medical team in the NATO- led International Security Assistance Force (ISAF) explains the usage of the medicine to father of an Afghan child patient during a joining ceremony of Taliban militants with the Afghan government in Baghlan, north of Kabul, Afghanistan. (AP)

NATO defense ministers will discuss on Thursday possible changes to the alliance's strategy in Afghanistan after the U.S. and France called for speeding up the handover of combat roles to local forces.

Both U.S. Defense Secretary Leon Panetta and French President Nicolas Sarkozy have suggested that the coalition should transition out of combat in 2013. Afghan security forces are supposed to assume responsibility for the war at the end of 2014, when the alliance expected to end its combat role.

"Hopefully by the mid to later part of 2013 we'll be able to make a transition from a combat role to a training, advise and assist role," Panetta told reporters Wednesday on the flight to Brussels. He added that this "doesn't mean we're not going to be combat-ready," but rather that the U.S. and other international forces will no longer be in "the formal combat role we're in now."

The ministerial meeting comes a day after a secret NATO report was leaked to the media suggesting that insurgent morale remains extremely high after more than a decade of war and that the Taliban remain confident they will defeat the coalition.

It also follows a series of attacks by members of Afghan forces on NATO troops or advisers. The repeated attacks have prompted worries about the degree of Taliban infiltration in the ranks of the national army and police, as they rapidly expand to meet the 2014 target for Afghan forces to take over security and most international troops to leave.

There have been at least 35 attacks on international troops since 2007 by Afghan soldiers, police or insurgents wearing their uniforms, according to a tally by The Associated Press. The number rose sharply last year to 17, up from six in 2010.

The two-day meeting of defense ministers starting Thursday is intended to pave the way for the alliance's summit in Chicago in May. Ministers are also scheduled to discuss plans to deploy a ballistic missile defense system in Europe.