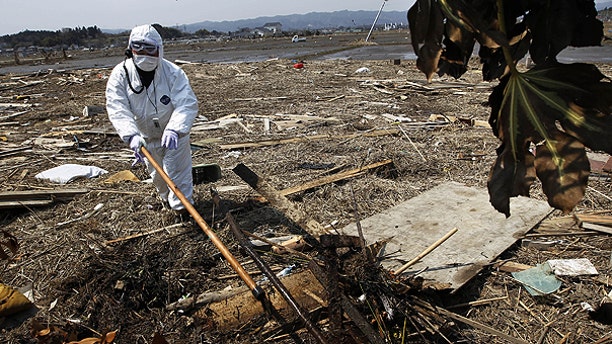 TOKYO -- Japan's Nuclear Safety Agency was set Thursday to view safety measures at nuclear plants across the country, as a report revealed that more than 100 designated evacuation centers were destroyed by the March 11 tsunami triggered by a magnitude-9.0 earthquake.

To date, no figures on the number of people who perished at the sites have been tallied.

As the nation continued to deal with the aftermath of the disaster, hundreds of police in protective gear for the first time scoured rubble-strewn neighborhoods near the crippled Fukushima power plant for bodies, AFP reported.

A force of 300 officers was deployed into the no-man's land -- pushing closer towards the plant after they started a wider search on April 3 that covered the outer areas of the 12-mile (20km) exclusion zone.

Police said many bodies were likely still in the area immediately around the complex, and that any remains would have to be thoroughly washed down before they could be taken away for autopsy and then cremation or burial.

The search came as Emperor Akihito made his first trip to a disaster-hit area, visiting evacuees at a shelter in Chiba prefecture.

In Fukushima, the facility's operator Tokyo Electric Power Co. (TEPCO) said Wednesday that some nuclear fuel rods in reactor No. 4 at the plant had been damaged, Kyodo reported.

A test on a water sample revealed evidence of radioactive iodine-131, cesium-134 and cesium-137 up to 100,000 times higher than normal. Work at the reactor, one of six, however was continuing.

In parliament Wednesday, Senior Vice Minister of Health, Labor and Welfare, Yoko Komiyama, told his colleagues that 22 employees at the Fukushima complex had been exposed to more than 100 millisieverts of radiation. The highest level of exposure among the workers was 198.24 millisieverts.

Background radiation levels of one to 1.5 millisieverts every year are normal, while nuclear workers are generally allowed exposures of up to 20 millisieverts annually.

In light of the unfolding nuclear crisis, Japan's Nuclear and Industrial Safety Agency was set to review safety measures at plants across the country, broadcaster NHK reported.

The move was prompted by the revelation that the Onagawa nuclear power plant in Miyagi prefecture had little protection against a tremor that struck last week.

The 7.1 magnitude aftershock on April 7 was 10 percent stronger than the level three reactors at Onagawa were built to withstand.

This is the third time the nuclear agency has asked for reviews of earthquake safety measures at utility companies -- the first came after the 1995 Great Hanshin earthquake and the second in 2007, after the Niigata Chuetsu coastal quake.

With the government promising a probe into the twin disasters, the vice chairman of the Japan Atomic Energy Commission urged an open and transparent review, Kyodo reported.

Tatsujiro Suzuki said the investigating committee should comprise of an independent third-party panel, instead of the government's Nuclear Safety Commission.

Suzuki called for "transparent approach that can be verified later by the international community."

An announcement about Makoto Yagi, current president of Kansai Electric Power Co., taking over the post was expected Friday, the sources said.

Shimizu -- who had been in the spotlight recently over a twice-rejected attempt to apologize to Fukushima Governor Yuhei Sato -- declined to comment Wednesday on whether he was stepping down.

The 66-year-old has been plagued with health problems since the crisis began, becoming ill on March 16 and taking a week off from a joint government task force. About two weeks later, he was admitted to hospital with dizziness and high blood pressure.