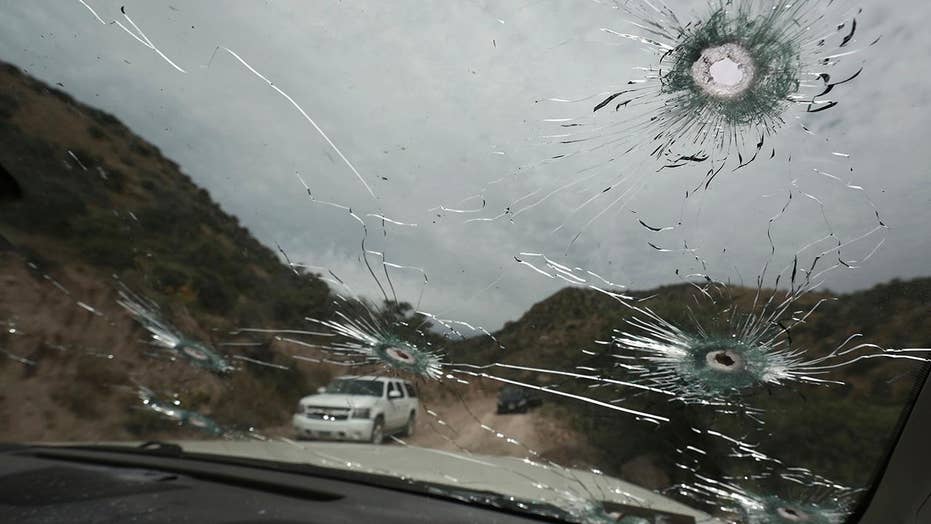 A monument will be erected to memorialize nine dual American-Mexican citizens who died in a hail of gunfire during an ambush along a remote stretch of road near the U.S.-Mexico border, Mexican President Andrés Manuel López Obrador said Sunday.

After a meeting with relatives of the victims in the Nov. 4 killings, López Obrador said an agreement had been reached between municipal officials and officials with the Mexican state of Sonora to build a monument to recognize the tragedy “where these lamentable and painful events took place."

“So that we exalt this, the true solidarity: He who is willing to give his life for another,” the president said during a ceremony.

Mexico's President Andres Manuel Lopez Obrador waves to residents during his visit to the small town of La Mora, Sonora state, Mexico. Lopez Obrador said Sunday there is an agreement to establish a monument will be put up to memorialize nine U.S.-Mexican dual citizens ambushed and slain last year by drug gang assassins along a remote road near New Mexico. (AP Photo/Christian Chavez)

In remarks to members of the La Mora community, he said the government's priority was to bring the suspected perpetrators to justice. Nine members -- three women and six children -- of the extended LeBarón and Miller families who lived in a faith-based community in the northern Mexico town were shot to death by suspected drug cartel gunmen.

The families are part of a decades-old settlement in Sonora state founded as part of an off-shoot of The Church of Jesus Christ of Latter-day Saints. The victims had dual-U.S.-Mexican citizenship.

“I love this country and it pains me to my soul to think of not being able to live here,” community member Margaret Langford said. “This massacre has left us lost and destroyed. I ask God that it not be what defines our community.”

The victims were traveling in three SUVs on a dirt road in broad daylight when they came under assault from a barrage of gunfire. Several drug cartels operate in the area where the killings took place.

Several suspects have been arrested on suspicion of having connections to the attack. One is the police chief of the town of Janos, Chihuahua, who was arrested last month. He reportedly had been on the payroll of the La Linea drug gang, which is allied with the Juarez Cartel.

López Obrador has come under criticism for not doing more to combat drug cartel violence, which has permeated throughout Mexico. On Sunday, he said his aim is to address the roots of the violence: poverty, inequality and lack of opportunities for young people.

Lenzo Widmar carries a sign that reads in Spanish: "Without just punishment for crime, freed is without defense" at the small town of La Mora, Sonora state, Mexico last week. (AP Photo/Christian Chavez)

“Deprive the fish of water,” the president said, “so there are no longer young people who want to be cartel killers.”

He promised to meet with family members in two months to give them an in-person update on the investigation into the killings and to return in four to six months to present a plan on regional development, including road improvements.