Mexican officials on Saturday closed a section of their border with Guatemala following a push by thousands of migrants to make their way across a bridge over the Suchiate River between the two countries.

About 2,500 migrants of all ages were held up and prevented from crossing or entering the bridge at Mexico's southern border by Mexican National Guardsmen, Guatemalan authorities estimated, according to The Associated Press.

Mexican authorities reportedly allowed several dozen migrants to enter into Mexico in groups of 20 but warned them against trying to slip away to avoid immigration processing.

Mexico's National Migration Institute said on Twitter that it had shored up points along the southern border to assure “safe, orderly and regular immigration.” 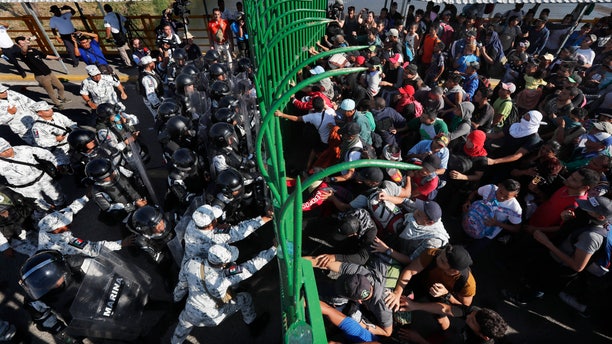 Migrants charge on the Mexican National Guardsmen at the border crossing between Guatemala and Mexico in Tecun Uman, Guatemala, Saturday, Jan. 18, 2020. More than a thousand Central American migrants surged onto the bridge spanning the Suchiate River, that marks the border between both countries, as Mexican security forces attempted to impede their journey north. (AP Photo/Marco Ugarte)

The Trump administration announced in November that it had started sending migrants from Honduras and El Salvador to Guatemala as part of its “safe third country” agreement. President Trump claimed the deal would help ease the immigration crisis at the southern U.S. border.

The American Civil Liberties Union (ACLU) mounted a legal challenge to the agreement, claiming that it violated federal law. It said safe countries must meet the standard of providing a “full and fair” procedure for asylum, and Guatemala does not.

“The Trump administration has created a deadly game of musical chairs that leaves desperate refugees without a safe haven, in violation of U.S. and international law,” Katrina Eiland, an attorney with the ACLU’s Immigrants’ Rights Project, said. “The administration is illegally trying to turn away asylum seekers and pass the buck to other countries that can’t protect them.”

The federal government claimed that Guatemala meets the “full and fair” standard and began sending migrants to the country. Department of Homeland Security (DHS) officials previously told Fox News that no migrants would be forced to go to Guatemala, and would instead be given the option of going back to their home country or waiting in Mexico. 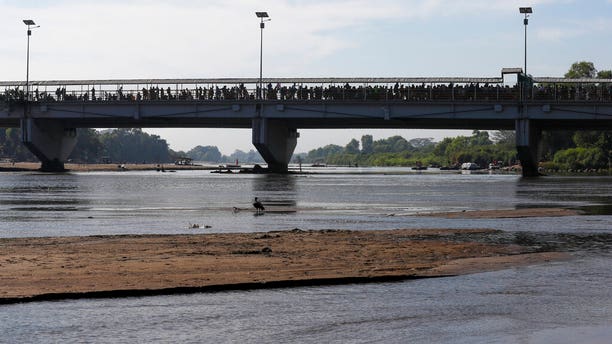 Migrants crowd the the bridge spanning the Suchiate River on the border between Guatemala and Mexico in Ciudad Hidalgo, Saturday, Jan. 18, 2020. More than a thousand Central American migrants surged onto the bridge as Mexican National Guardsmen attempted to impede their journey north. (AP Photo/Marco Ugarte)

News of the clash on the Suchiate River comes just days after a caravan of hundreds of Honduran migrants began making their way north, on Wednesday.

Past caravans have had an overwhelming effect on the U.S. immigration system, but it's unlikely this most recent surge will reach the southern border, as Mexican officials remain on high alert and had vowed to block hundreds of mostly Honduran migrants hoping to reach the United States.

“The truth is, it is going to be impossible for them to reach the United States,” human rights activist Itsmania Platero said. “The Mexican police have a large contingent and they are going to catch all the migrants without documents, and they will be detained and returned to their home countries.”

Fox News' Adam Shaw and Louis Casiano contributed to this report, as well as The Associated Press.