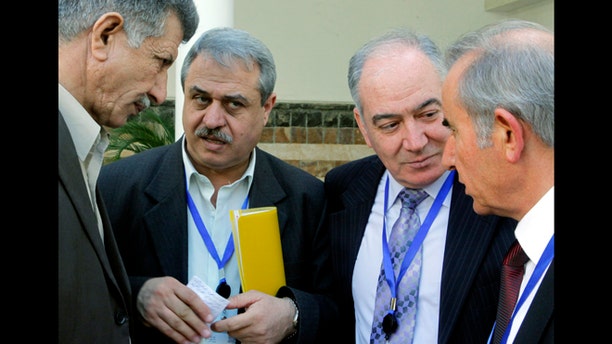 March 24, 2013: Syrian Alawites Mahmoud Maraie, second left, and Bassam al-Malek, second right, talk with other members of the Syrian Alawite sect who are opposed to Syrian President Bashar Assad in Cairo, Egypt. Members of Assad's Alawite sect met in Cairo on Sunday in an attempt to distance themselves from the Damascus regime in its crack down on the Syrian revolution. (AP)

Dozens of people from Syrian President Bashar Assad's own minority sect met in Cairo on Sunday to send an unusual message to their fellow Alawites back home: Join the opposition before it is too late.

The Alawites have long been seen as a backbone of the Assad regime, and a decision to support the rebel force in Syria is complicated by the fact that many see their own futures interlocked with Assad's survival.

The pressure on Alawites who dare oppose Assad comes not only from the regime, but also from within their own families. Nearly all of the 50 Alawites at the opposition conference have been arrested, abused or threatened for their political views. One participant said he received an email threatening his life if he attended the conference.

The Alawites, an offshoot of Shiite Islam, are a tiny sect, representing roughly 12 percent of Syria's population. Many live in towns and villages along the mountainous Mediterranean coast. Most have either rallied behind Assad or stayed quietly on the sidelines of the 2-year-old civil war, which has killed more than 70,000 people.

The opposition meeting — the first of its kind for Alawite Syrians since the war began — reflects fears that they would fall victim to revenge killings and assassinations should Assad's regime fall. Some are particularly worried about the influx of foreign jihadist fighters into Syria who view Shiites as heretics.

Many minority Alawites see the war in Syria as a fight for survival against the Sunni majority. Alawites hold key posts in the army alongside some Sunnis and members of other groups that have been given top government and military positions to foster loyalty to the regime.

A statement by the Alawite opposition group said "the Syrian regime has no identity except that of tyranny."

"The Syrian regime lies when it says it protects minorities, particularly the Alawites ... in an attempt to portray to the world that it is fighting Islamic extremists and terrorism," the statement said.

Rita al-Suleiman, 29, said she had to flee Syria last year after her brother told her that he had been questioned in prison about her anti-regime activities in Homs.

"I was at first careful not to attend meetings, but then my family said they have nothing to do with me so I grew bolder," she said. "It's been very hard to leave them behind."

Like others at the conference, she said many Syrians are no longer afraid to voice their opinions, but that Alawites are under greater pressure from members of their own community not to speak out.

Bashar Aboud, 40, said his relatives warned his parents they would burn their house down if he continued defying the regime. The 40 year-old father of two, who now resides in Cairo after fleeing Syria during a 2001 crackdown on opposition figures, said his parents were forced to go on Syrian TV and disown him.

Those at the conference stressed that Alawites have long been and want to continue to be a part of the fabric of Syrian society.

"In the end we are all on the same boat and it's sinking," Aboud said, referring to Syria's precarious situation. "We are part of the team that is trying to save this boat."

One participant described the conferees as a real opposition movement that does not want to be separated from the homeland. He said he opposed dividing Syria along sectarian lines or the possibility of a breakaway enclave for Alawites as was the case under French mandate for a few years in the late 1930s.

He spoke on condition of anonymity because he feared reprisals against his family in Syria.

Despite efforts by the participants to frame the conflict as a despotic regime against its people, signs of sectarian warfare are rife in Syria.

The army is being reinforced by pro-regime militias, packed with Alawites who have been accused of conducting massacres in which hundreds of civilians, including women and children, were killed.

The Syrian government claims gunmen driven by the agendas of foreign countries are responsible for the killings, but the United Nations and other witnesses have confirmed that at least some were carried out by pro-regime vigilante fighters.

Another Alawite participant at the conference said his two sons were forced out of work last year to serve in one of the national security branches, and were deployed to areas of heavy fighting, including the outskirts of Damascus.

He claimed that his sons, ages 28 and 30, had witnessed severe beatings and killings by the regime. The participant, a long-time opposition activist who wrote under the pseudo name Sami Saleh, said he and his two sons relied on Sunni fighters in the rebel Free Syrian Army to help them escape through Turkey.

He also spoke on condition of anonymity out of fear of reprisal against relatives still in Syria.

Some three-fourths of Syrians are Sunni Muslims, but the country is also home to other Muslim groups, as well as Christians and ethnic communities of Kurds, Armenians and others. All coexisted with varying degrees of ease under Assad's regime, founded more than four decades ago by his father, Hafez, and inherited by Bashar in 2000.

The Alawite opposition conference was funded by rich businessmen from the sect, according to its organizer Bassam Youssef, who was detained for 11 years under Hafez for his communist activities against the ruling Baath Party.

A large green-striped Syrian rebel flag draped the speaker's podium and a banner in the back read: "We are all Syria. We are with a united Syria."

Several members of the main Sunni-led Syrian opposition coalition also attended the Alawite conference in solidarity. They too have struggled, coalescing around a unified voice. Its president, Mouaz al-Khatib, resigned Sunday citing frustration with the level of international support and constraints imposed by the body itself.