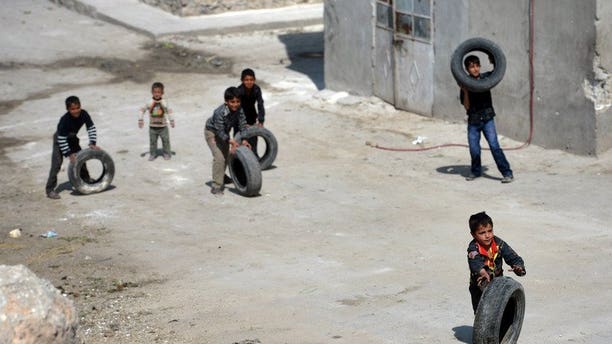 Syrian children roll used car tyres on a street in the northern Syrian city of Aleppo on April 12, 2013. An epidemic of measles is sweeping through parts of northern Syria, with at least 7,000 people affected because the ongoing civil war has disrupted vaccination programmes, Doctors Without Borders said on Tuesday. (AFP/File)

An epidemic of measles is sweeping through parts of northern Syria, with at least 7,000 people affected because the ongoing civil war has disrupted vaccination programmes, Doctors Without Borders said on Tuesday.

"The main factor leading to the worsening of the situation and to outbreaks has been the disruption of routine immunisation activities," MSF said.

Consequently, vaccination coverage for measles has dropped from around 80 percent to almost zero among young children, it added.

Only 13 cases were reported throughout the country in 2010 and 26 in 2011, according to World Health Organisation data.

Now at least 7,000 people have been infected, with the disease spreading more quickly in part because of the large number of Syrians displaced by the conflict and living in close quarters.

In a bid to stem the epidemic, MSF has been conducting an immunisation programme in parts of northern Syria that are largely rebel-controlled.

The group said it had vaccinated more than 75,000 children in the provinces of Aleppo, Raqa and Idlib.

But the war has made the process difficult.

"Queues for vaccinations had to be avoided for fear that they might attract air strikes or rocket attacks," MSF said.

The group also warned that while the mortality rate associated with the current measles outbreak was low, infection would render children more vulnerable to other diseases at a time when basic healthcare is increasingly unavailable.

"Complications arising from measles can be life-threatening," the group said.

"Apart from the direct victims of the violence in Syria, mortality rates are rising, especially among the most vulnerable, due the to lack of preventative measures such as vaccinations and the lack of access to basic health care," MSF said.