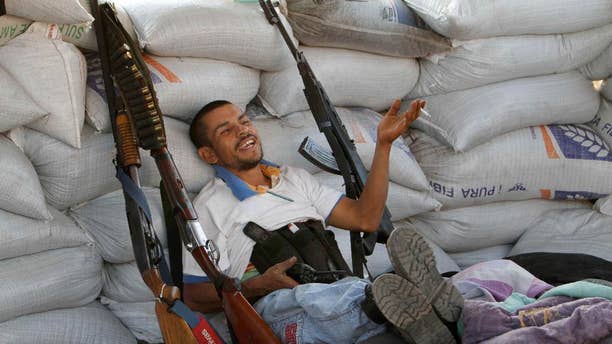 FILE- In this Feb. 9, 2014, file photo, flanked by weapons a man from a self-defense group sits inside a barricade at the entrance of Apatzingan in Michoacan state, Mexico. Vigilantes who have driven a quasi-religious drug cartel from a series of towns in western Mexico entered Apatzingan on Saturday and were working with government forces to clear it of cartel gunmen. The Mexican government announced Tuesday April 15, 2014, that vigilante groups in the western state of Michoacan will have until May 10 to register their guns and decide whether to join the army’s “rural defense corps.” (AP Photo/Marco Ugarte File) (The Associated Press)

Prosecutors in western Mexico arrested the mayor of a city that once served as a stronghold of the Knights Templar drug cartel on charges that he helped the gang extort money from city council members.

Prosecutors in Michoacan state said late Tuesday that they arrested Uriel Chavez Mendoza, the mayor of Apatzingan, after three city council members claimed he forced them to gather in a rural area, where cartel gunmen demanded each hand over 20,000 pesos (about $1,500). The gunmen allegedly said the money was to buy weapons.

The meeting was held in January 2012, when the cartel was at the height of its power, according to prosecutors.

The "self-defense" vigilante movement that sprang up last year to fight the cartel had long claimed the Knights Templar controlled, or extorted money from, municipal governments in the western, largely agricultural state.

Some town governments were forced to hand over 10 percent of the money they got from the federal government to the cartel, local residents say. Some officials were also forced to grant public works projects to cartel-controlled construction companies.

The arrest of the Apatzingan mayor was the latest case that appears to illustrate the near complete control the pseudo-religious Knights Templar exerted over Michoacan until the vigilantes began fighting them in February 2013.

The arrest comes 10 days after the detention of Jesus Reyna, Michoacan's former interior secretary — the state's second highest-ranking official — under a form of house arrest. Federal Attorney General Jesus Murillo Karam said there was evidence that Reyna met with the leaders of the Knights Templar. Reyna has not been formally charged and in the past has denied links to the cartel.

Officials have confirmed that the cartel had demanded protection payments from almost every type of farm, orchard and business in the state. The cartel also manipulated distribution and production of produce like limes and avocados, apparently to raise prices and increase their cut.

And in some industries, like mining, the Knights Templar set up their own commercial operations, even exporting iron ore to China.

There had been longstanding reports of cartel involvement in Michoacan politics, but previous efforts to prosecute alleged offenders have ended in embarrassing failures.

In 2009, federal prosecutors arrested 12 mayors and 23 other Michoacan officials for supposedly aiding the La Familia drug cartel, the predecessor of the Knights Templar. Two years later, all 35 officials had been acquitted.