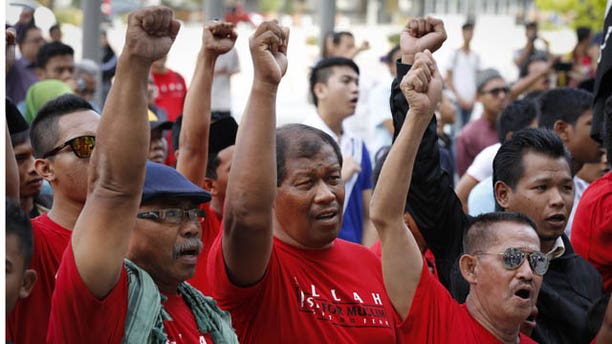 A Malaysian appeals court on Monday upheld a government ban against the use of the word "Allah" to refer to God in non-Muslim faiths, overruling claims by Christians in this Muslim-majority nation that the restriction violates their religious rights.

"Allah" is the Arabic word for God and is commonly used in the Malay language to refer to God. But the Malaysian government insists that "Allah" should be exclusively reserved for Muslims because of concerns its use by others would confuse Muslims and could be used to convert them.

Malaysia's Christian, Buddhist and Hindu minorities have often complained that the government infringes in their constitutional right to practice religion freely, accusations the government denies.

Monday's judgment in the Court of Appeals overturns a decision by a lower court nearly four years ago that ruled against the government ban. Anger over that ruling sparked a string of arson attacks and vandalism at Malaysian churches and other places of worship.

The legal dispute stems from efforts by the newspaper of the Roman Catholic Church in Malaysia to use "Allah" in its Malay-language weekly publication.

Roman Catholic representatives deny there are attempts to convert Muslims and say the government ban is unreasonable because Christians who speak the Malay language had long used "Allah" in their Bibles, literature and songs before authorities sought to enforce the curb in recent years.

Judge Mohamed Apandi Ali, who led a three-member appeals court panel, said the use of "Allah" was "not an integral part of the faith and practice of Christianity."

"It is our judgment that there is no infringement of any constitutional rights" in the ban, he said. "We could find no reason why the (Catholic newspaper) is so adamant to use the word 'Allah' in their weekly. Such usage if allowed will inevitably cause confusion within the community."

The Rev. Lawrence Andrew, editor of the Catholic newspaper, The Herald, said they plan to appeal Monday's verdict in Malaysia's Federal Court, the nation's highest.

"We are greatly disappointed and dismayed," he said. "This is unrealistic. It is a retrograde step in the development of law in relation to the fundamental liberty of religious minorities."