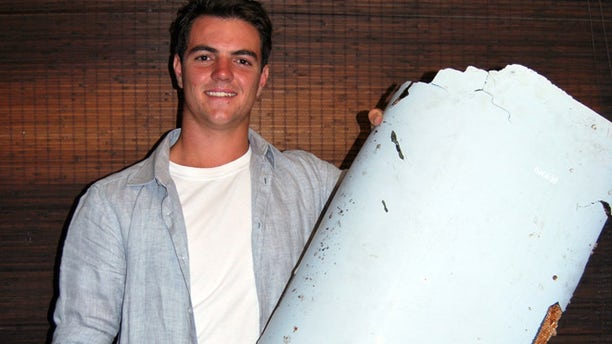 Liam Lotter poses with a piece of debris thought to be part of the missing Malaysia Airlines Flight MH370, in Wartburg, South Africa. (Candace Lotter via AP)

A South African archaeologist has found a piece of debris with part of an aircraft engine manufacturer's logo and Malaysia's transport minister said Tuesday that authorities will examine it to see if it is from the missing Malaysia Airlines Flight 370.

"Based on early reports, there is a possibility of the piece originating from an inlet cowling of an aircraft engine," but a further examination and analysis are needed to verify whether it belongs to Flight 370, said Malaysian Transport Minister Liow Tiong Lai.  A team will be dispatched to retrieve the debris, Liow said in a statement.

On South Africa's southern coast, Neels Kruger was walking along a lagoon on Monday afternoon, near the town of Mossel Bay when he spotted something that did not seem to suit the natural surroundings.

"Being an archaeologist I'm always looking for things with my nose to the ground," said the 35-year-old. He recognized the brown honeycomb structure from photos of other pieces of debris believed to part of the missing aircraft.

"When I flipped it around, I didn't know immediately what it was but just thought, `Oh my word!"' he told The Associated Press in a telephone interview. On the other side, Kruger said he recognized what remains of the black Rolls Royce logo, the manufacturer of aircraft engines. The piece is about 70 centimeters by 70 centimeters (27.56 inches by 27.56 inches) "with chunks gone from the side," said Kruger.

The white surface, with the partial logo, has peeled away to reveal a dark metallic grey covering, a photograph showed. Kruger took photos and sent it to a friend who is a pilot, who in turn passed it on to other pilots, who all quickly became convinced that this was part of an airplane engine. Kruger alerted the South African Civil Aviation Authority who told him to sit tight until further instruction.

Wondering what to do next, he sent a message via Facebook to Liam Lotter, the South African teenager who also found a piece of aircraft debris. In December last year, the 18-year-old found what he believes could be the wing of the missing plane on a beach in neighboring in Mozambique. Lotter, who announced his discovery earlier this month, passed along the contact details of the Australian authorities tasked with leading the investigation into the missing plane.

The Malaysia Airlines jet disappeared on March 8, 2014, with 239 people on board while flying from Kuala Lumpur to Beijing. The plane remains one of the biggest mysteries in modern aviation.

An Australian-led underwater search in the southern Indian Ocean, where the plane is believed to have crashed, has found no trace of it so far. A piece from one of the plane's wings was found washed ashore on France's Reunion Island last July.

Two more possible pieces of debris which were discovered recently in Mozambique, by the South African teen and an American adventurer, are being examined by an international investigation team in Australia.

Investigators have said the search will end by June unless fresh clues are found.