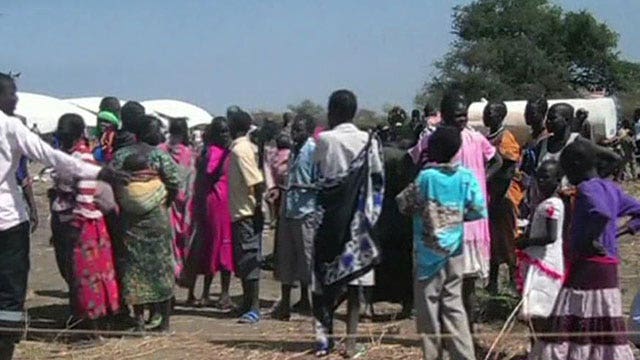 Inside look at the tension in South Sudan

EXCLUSIVE: In a year pockmarked by an ongoing pandemic, the type of tragedy that brings faded war memories back to life, Rebecca Deng has a reason to truly celebrate Christmas in her snow-dusted home of Holland, Mich.

As part of an annual ritual, many in the U.S. diaspora from South Sudan -- the Christian-majority land parcel that was chiseled off from the Muslim-dominant north of Sudan to become the world’s newest official country in 2011 -- send aid and money to languishing loved ones for some holiday cheer.

But in a small South Sudanese village earlier this month, in a shaky phone-recorded message, one man can be seen in his white robes standing before a primitive hut expressing, in his native tongue Dinka, gratitude for such assistance to buy staples like maize and beans.

He speaks passionately about his baby niece -- the daughter of his sister who was slain following an attack in the Second Sudanese Civil War, dragging on from 1983 to 2005, between rebel fighters and an authoritarian government in Khartoum.

His sister -- Deng's mother -- had been heavily pregnant at the time and was propelled to run from the attackers on foot to reach the closest hospital. But with few medical resources and a clinic overwhelmed by the wounded, she died due to complications in childbirth.

Deng’s baby sibling lived to see a little sunlight, she said, but died a couple of months later.

In the video, the man remembers the suddenly motherless 2-year-old Deng, who four years later disappeared with the throes of those fleeing as her home village of Duk Padiet was set ablaze by incoming insurgents. Yet he remains firm that at some point, from someplace, that child was sent to the United States.

The video was shared on Facebook. Someone within the community sent it to Deng. She immediately knew it was her uncle: the only close surviving family member in a savage conflict that killed more than 2 million, displaced over 4 million and left countless bodies and brains broken and disfigured in its ashen aftermath.

"I saw this man who was missing one arm, standing up and calling for his sister’s daughter, adamant that the baby [made it out] alive," Deng told Fox News. "It was my Uncle Peter."

She was able to track down a phone number more than 7,000 miles away and last weekend made that long-awaited call.

"He just screamed; I could hear people in the background telling him to sit down. Then he was laughing," Deng continued, detailing the way his voice rose to a shrill in delight and the image of his face dripping with tears. "He kept saying that he was always looking to the day that he would hear my voice, that he still mourned [for my mother] and having to bury her."

Peter Nyok Riak -- her uncle's full name -- promised he could now sleep so well. That is was the most precious day of his life, which had been struck by something divine in the dawn weeks before Christmas.

When the simmering conflict flared again, her father -- a commander in the rebel Sudanese People’s Liberation Army (SPLA) and based in Ethiopia -- hurried back to his homeland. He went in the opposite direction to his fleeing family, so they passed like ships in the night. He was later killed.

Deng’s grandmother, who raised her after her mother’s death, also lost her life.

"She died either of starvation or heartbreak," Deng said. "But I think it was heartbreak."

For some eight years, from 1992 onward, Deng lived in the Kakuma Refugee Camp's dusty confines in northern Kenya, which remains one of the continent’s largest for the displaced today. But growing up in a country cracked with bloodletting and barbarity wasn’t the only agony Deng was made to endure as a small girl.

Just days before she boarded her flight to the U.S as part of the "Lost Girls" program, she was raped in the refugee camp -- she learned soon after being taken in by a foster family in Michigan, and still something of a child herself, that she was pregnant from the assault. Always a dedicated student, Deng credits the sliver of access she had to education in the camp as being a key driver, along with her faith, to not only surviving but thriving as a young mother balancing books with her parenting duties.

For some eight years, from 1992 onwards, Deng resided in the Kakuma Refugee Camp's dusty confines in northern Kenya, which remains one of the continent’s largest for the displaced today. (Fox News/Hollie McKay)

In the U.S, Deng went on to earn a bachelor’s degree in international development from Calvin University and a master’s in organizational/ministry leadership from Grand Rapids Theological Seminary and became an American citizen in 2006. Last year, she published the poignant memoir "What They Meant for Evil" and advocates for children traumatized by war.

Telling the story to her now 19-year-old daughter, Cholie, who is also profoundly dedicated to her faith and in serving missionaries worldwide, has come with its own set of stigmas to wade through and challenges to navigate. Deng also has a 4-year-old son and 3-year-old daughter, and along with motherhood, endeavors to heal her own silent and gaping war wounds through prayer.

"What kept me going through all those years in the refugee camp was going to school and church," Deng said. "But it was more than that -- it was less about the preaching and more about the friendships we formed at Church. It was about singing and dancing with my friends. It was a community that was there for each other. It was knowing that together we were all going through -- and healing from -- traumatic events, and yet we did not have to say a word."

Although the Christian community is comparatively small in her Michigan town, and the coronavirus pandemic has limited access to physical houses of worship, Deng said she continues her Bible studies at home and sings aloud hymns in Dinka.

Shoes left behind belonging to Tigrayan refugees are scattered near the banks of the Tekeze River on the Sudan-Ethiopia border after Ethiopian forces blocked people from crossing into Sudan, in Hamdayet, eastern Sudan, Tuesday, Dec. 15, 2020. (AP Photo/Nariman El-Mofty)

Although severed from its larger neighbor, South Sudan remains a country carved up by conflict, chaos, famine and a sense of the unknown. It's wracked by bouts of infighting and decades' worth of collective pain and memory.

Yet connecting with her uncle in the days before Christmas has also brought it with a pause for deeper reflection and a continued commitment to helping others.

"There is nothing that cannot be healed if it is loved well. We need to speak out on the things that keep us going even when we are not whole," Deng added. "Becoming whole is a lifetime of work, and we never get there. But it is a journey of faith, a belief in something higher."