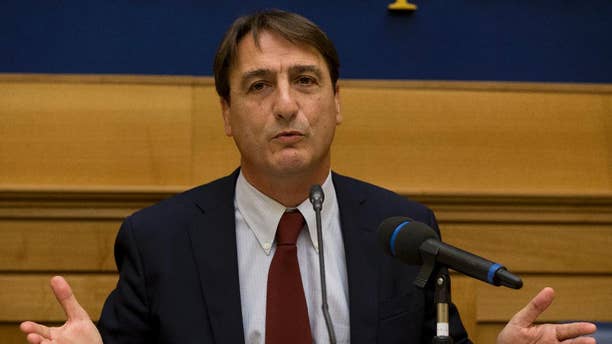 An Italian lawmaker has decried a secret arrangement in which intelligence agents paid imprisoned top Mafiosi for information during several of the years when Silvio Berlusconi was premier.

Claudio Fava, vice president of Parliament's anti-Mafia commission, told reporters Tuesday that magistrates who investigate Italy's organized crime syndicates were kept in the dark about the practice, described in a written protocol between the now-defunct intelligence agency Sisde and the national prison administration agency. The practice came to light after Premier Matteo Renzi declassified the document in July, and the arrangement was subsequently made public at the appeals trial of a former Sisde chief, Mario Mori, in Palermo, Sicily.

The arrangement ran from about 2003 to 2007. The commission will begin hearings Wednesday to learn if information bought from bosses was useful. Fava said he suspects the information might have been used to derail investigations into whether politicians had links with the Mafia.

"We didn't know then" that the arrangement was in place, and "we still don't know what information was passed on from Mafiosi to intelligence agents," Fava said. In effect, the intelligence agency was "managing top bosses held in tough prison conditions for a period protracted in time."

"We don't know who was paid and how much," said the lawmaker, who is the son of a journalist slain by the Mafia in 1984. However those believed to have been paid, Fava said, include the former right-hand man of Bernardo Provenzano, the top Mafia boss who was captured in 2006 after decades as a fugitive in a farmhouse near his stronghold in Corleone, Sicily.

The former Sisde chief Mori is accused of deliberately failing to capture Provenzano years earlier. He was acquitted in a lower court trial.

In separate trial in Sicily, prosecutors allege that former interior minister Nicola Mancino and other politicians negotiated with the Mafia with the aim of preventing bombings ordered by top bosses in the early 90s. Among targets previously bombed by the Mafia were the Uffizi Gallery in Florence and two churches in Rome, as it sought revenge following the 1993 capture of longtime fugitive "boss of bosses" Salvatore Riina. Prosecutors allege that government officials were offering to ease the state's war on the Mafia if the bombings stopped.

Mancino, has denied any such contacts with Mafia bosses. Recently, Italian President Giorgio Napolitano was ordered by the judge in the Mancino trial to testify. In an intercepted phone conversation during that probe, Mancino was heard asking an aide of Napolitano if there was some way he could avoid the trial. Napolitano has denied knowing about the phone call or any negotiations between the state and the Mafia.

In recent years, some top politicians have been convicted of Mafia ties, including an ex-governor of Sicily and a former top aide to Berlusconi.