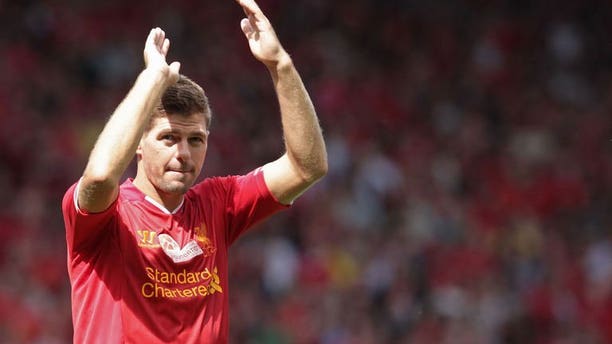 Liverpool captain Steven Gerrard waves to fans after their 2-0 win in the pre-season friendly match against Olympiakos in Liverpool on August 3, 2013. Liverpool supporters paid tribute to Gerrard as their Reds continued preparations for the start of the Premier League season with a 2-0 victory over Olympiakos. (AFP)

Liverpool supporters paid tribute to captain Steven Gerrard as their Reds continued preparations for the start of the Premier League season with a 2-0 victory over Greek side Olympiakos on Saturday.

The Anfield friendly served as a testimonial match for Gerrard, who hoped to raise around ??1 million for his charitable foundation as he marked his 15 years with his home-town club.

After a close-season dominated by the future of controversial forward Luis Suarez, currently the subject of a ??40 million bid from Arsenal, it must have been a relief for manager Brendan Rodgers to focus on matters on the pitch as he prepares for Liverpool's opening league fixture against Stoke on August 17.

Suarez, who is banned for the opening six fixtures of the coming campaign as a legacy of his highly-publicised biting of Chelsea's Branislav Ivanovic late last season, watched from the bench for the opening hour before being introduced into the action.

His name had been greeted by cheers from the 44,362 Anfield supporters before kick-off with television cameras focusing on at least one banner in the stands which begged "Please Stay Luis Suarez."

While Suarez's arrival as a substitute was warmly received by home fans, Rodgers would also have been happy to focus on life beyond the Uruguay international, handing starts to recent signings Simon Mignolet, Kolo Toure and Iago Aspas, while a fourth newcomer, Luis Alberto, was among the substitutes.

And Liverpool completely dominated proceedings with forward Aspas and midfielder Joe Allen missing a stream of first half chances.

Allen made amends for his own errors by steering home the only goal of the first half after 23 minutes, converting an Aspas shot which had been set up thanks to the neat footwork of winger Raheem Sterling following poor defensive play from the visitors.

Aside from the opening goal, the main interest for the near-capacity Anfield crowd appeared to lie in seeing Gerrard score on his big occasion.

Olympiakos were picked as the opposition for Gerrard's big day in a salute to his stunning strike against the Greeks in a 2004 Champions League tie that sparked the club's epic run to their fifth European crown later that season.

Unfortunately for the 33-year-old he was unable to reprise those heroics this time.

Coutinho came close to laying on a goal for the England captain after 40 minutes with a well-aimed pass which the midfielder just failed to control close to goal.

Jordan Henderson, introduced as a second half substitute along with Suarez and now-retired Anfield favourite Jamie Carragher, scored with his first touch from Coutinho's 62nd minute pass.

As the game took on a more informal mood, Rodgers brought on Luis Alberto and Gerrard's former Liverpool team mate and friend Robbie Fowler, the former England striker, as substitutes for the closing 17 minutes.