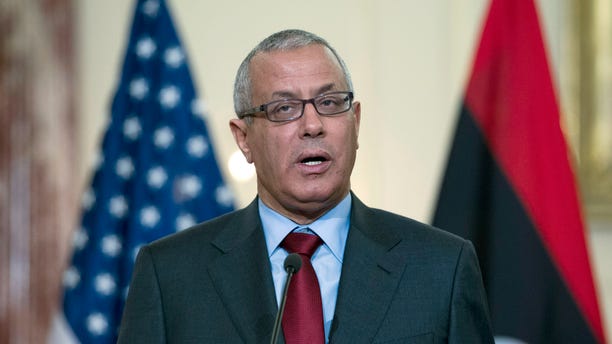 FILE - In this March 13, 2013 file photo, Libyan Prime Minister Ali Zidan speaks during a joint news conference with U.S. Secretary of State John Kerry at the State Department in Washington. Libya's parliament passed a law on Sunday, May 5, 2013, that bans officials who held senior positions under ousted dictator Moammar Gadhafi from holding high-level government posts, a move that could disqualify much of the country's political elite from office including Prime Minister Ali Zidan, who served as a diplomat under Gadhafi. (AP Photo/Jose Luis Magana, File) (The Associated Press)

Libyan militias are not backing down from their protests outside government buildings despite passage of a sweeping law that bans from government positions officials who served in senior posts under the former regime.

Parliament passed the Political Isolation Law under pressure from militias Sunday. The law could remove Zidan from power.

Zidan, who is popular among many, has angered militias by calling on them to join the government's security forces. He has vowed to take a hardline stand against armed groups that do not fall in line.

He also threatened to summon outside help to confront the armed groups.