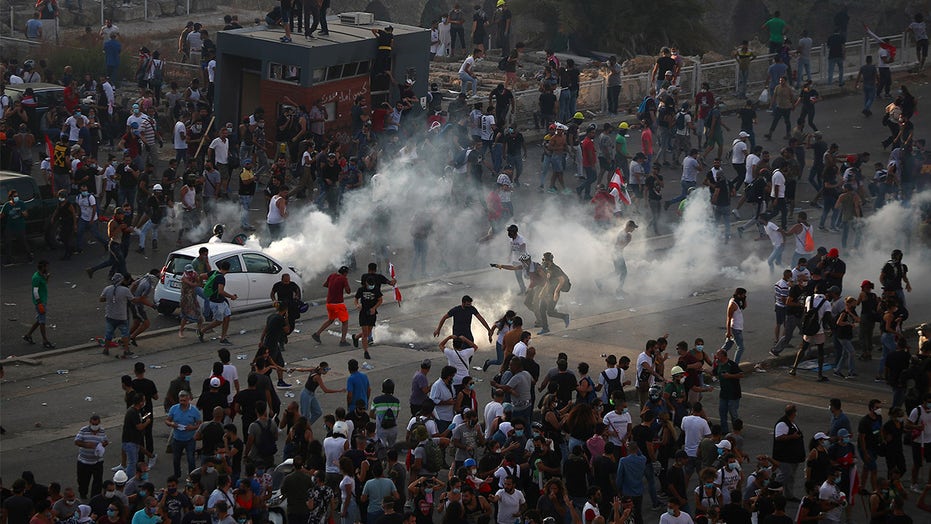 Protesters also trashed and set fire to the offices of the Association of Lebanese Banks as shots rang out in increasingly violent demonstrations following this week’s explosions that killed at least 160 and injured nearly 6,000 others.

They called on politicians to resign and for them to be punished for negligence they say led to Tuesday’s blasts. Some hung symbolic nooses in Martyr's Square.

Demonstrators run away from tear gas fired by riot police during a protest following Tuesday's blast, in Beirut, Lebanon, Aug. 8.

Residents' frustrations have mounted even as France, the U.S., Australia and other countries pledge aid to help local officials sift through the rubble of hundreds of homes and buildings. Officials estimate that at least 300,000 people have been left homeless.

A police officer was killed during the clash, a spokesman said. Another officer said he died after falling into an elevator shaft in a building after being chased by protesters.

The Red Cross treated 117 people for injuries on the scene and took another 55 to the hospital. Policemen were treated after protesters threw stones at them.

After dozens of protesters broke into the foreign ministry, they burned a portrait of President Michel Aoun, who they say represents a political class that has ruled the nation for decades and has failed Lebanon.

“The people want the fall of the regime,” they chanted, a slogan coined during the Arab Spring uprisings of 2011. They held posters saying “Leave, you are all killers.”

As about 10,000 gathered in Martyr’s Square, police fired tear gas at protesters who attempted to break through a barrier keeping them away from parliament, according to a Reuters reporter.

Hours after protests first broke out in Beirut, Lebanon's Prime Minister Hassan Diab vowed to hold early elections as his beleaguered government faced calls to resign. Diab said he would put forth a law calling for early elections and he would remain in government for two months until major parties come to an agreement.

The U.S. embassy in Beirut has voiced support for peaceful protesters.  "The Lebanese people have suffered too much and deserve to have leaders who listen to them and change course to respond to popular demands for transparency and accountability," the embassy tweeted on Saturday night. "We support them in their right to peaceful protest, and encourage all involved to refrain from violence."