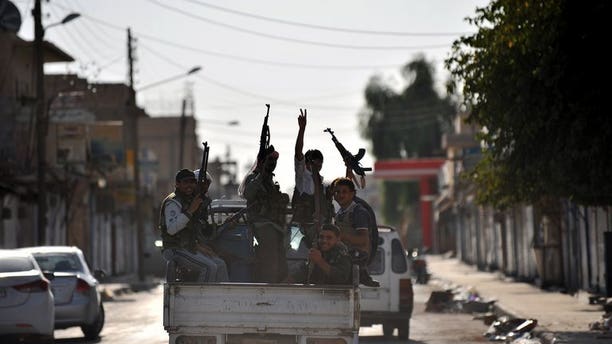 Syrian rebels raise their weapons during a patrol in the town of Tal Abyad near the border with Turkey on October 5, 2012. Syrian Kurdish fighters in the north fought fierce battles against jihadists and captured a commander of the Islamic State of Iraq and the Levant (ISIS) late Saturday, a monitoring group said. (AFP/File)

Syrian Kurdish fighters in the north fought fierce battles against jihadists and captured a commander of the Islamic State of Iraq and the Levant (ISIS) late Saturday, a monitoring group said.

"Battles pitting fighters from the Kurdish Fighters brigade against ISIS and other groups are raging on in several areas of Tal Abyad in Raqa province, after (Kurdish) fighters captured ISIS' emir in the town," said the Syrian Observatory for Human Rights.

Observatory director Rami Abdel Rahman told AFP the emir's nom-de-guerre is Abu Musab, though it was unclear whether he is Syrian or foreign.

The development comes just days after fighters loyal to the Committees for the Protection of the Kurdish People (YPG) expelled Al-Nusra Front and ISIS from the strategic Kurdish town of Ras al-Ain in Hasake province.

The clashes in Tal Abyad, which lies on the Syrian border with Turkey, broke out after jihadists ambushed a school that Kurdish fighters in the town were using as a base, said the Britain-based Observatory.

Earlier Saturday, Kurdish fighters in the majority Kurdish province of Hasake expelled jihadists from a checkpoint and seized their ammunition.

Kurdish regions have been run by local Kurdish councils since President Bashar al-Assad's forces withdrew from the areas in mid-2012.

Since then, the Kurds have walked a fine line, trying to avoid antagonising either the regime or the rebels, and focusing on maintaining security while strengthening control over their own affairs.

But this week alone, more than 50 jihadist and Kurdish fighters were killed in fighting in northern Syria, according to a toll released earlier Saturday by the Observatory.

Kurds represent about 15 percent of the Syrian population.