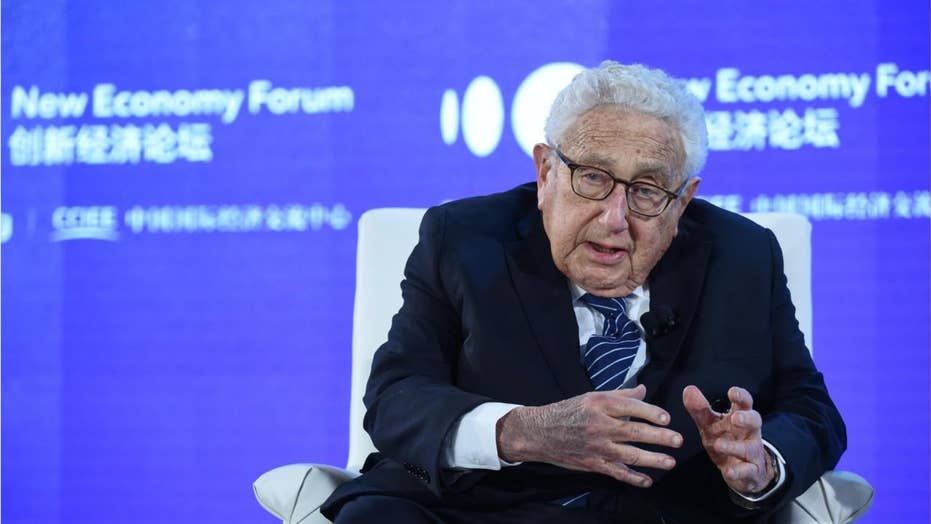 Former U.S. Secretary of State Henry Kissinger is warning that the US-China trade war could spark conflict worse than WWI. The 96-year-old, who was President Nixon’s secretary of state, made the statement to a Beijing audience.

Former U.S. Secretary of State Henry Kissinger told an audience in Beijing on Thursday that China and the United States are in the “foothills of a Cold War,” warning that the current trade war between the two nations could escalate into an armed conflict worse than World War I if left unresolved.

Kissinger, who as President Nixon’s secretary of state flew to Beijing to begin trade talks with Communist China in 1971, gave his take on modern U.S.-Chinese relations at the Bloomberg New Economy Forum.

"If conflict is permitted to run unconstrained, the outcome could be even worse than it was in Europe," Kissinger said. "World War I broke out because of a relatively minor crisis ... and today the weapons are more powerful."

"If conflict is permitted to run unconstrained, the outcome could be even worse than it was in Europe. World War I broke out because of a relatively minor crisis ... and today the weapons are more powerful."

“That makes it, in my view, especially important that a period of relative tension be followed by an explicit effort to understand what the political causes are and a commitment by both sides to try to overcome those,” Kissinger continued, according to Bloomberg. “It is far from being too late for that, because we are still in the foothills of a Cold War.”

China has taken issue with Washington over Congress’ recent passage of a bill aimed at protecting human rights in Hong Kong amid an escalating pro-democracy movement in the semiautonomous Chinese city. The U.S. has criticized the detention of Muslims in China’s Xinjiang region, and both nations remain locked in a contentious strategic competition in the South China Sea.

Kissinger, 96, made the remarks as the U.S. and China struggle to reach a trade agreement. President Trump began imposing punitive tariffs on Chinese exports nearly 18 months ago, citing trade and technology policies that he says violate Beijing’s market-opening commitments and are unfair. Since then, tariffs have been raised by both sides on billions of dollars’ worth of each other’s exports, squeezing farmers and manufacturers. A fresh set of tariffs is due to take effect Dec. 15 on about $160 billion of Chinese exports to the U.S., including smartphones, laptops and other consumer goods.

“Everybody knows that trade negotiations, which I hope will succeed and whose success I support, can only be a small beginning to a political discussion that I hope will take place,” Kissinger added.

Trump had said he hoped to sign a preliminary agreement with his Chinese counterpart, Xi Jinping, at a regional economic summit in Chile in mid-November that was canceled due to protests. Prospects for the two leaders to meet and sign a deal soon appear uncertain.

Chinese Vice President Wang Qishan delivered a speech at the start of the forum, calling for better relations between the two world powers.

“Between war and peace, the Chinese people firmly choose peace. Humanity cherishes peace,” he said. “We should abandon the zero-sum thinking and cold war mentality.”