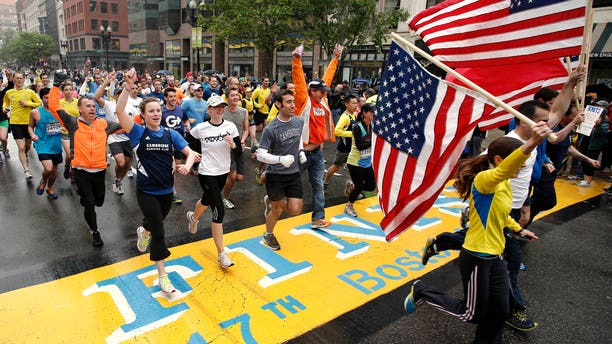 Runners who were unable to finish the Boston Marathon on April 15 because of the bombings cross the finish line on Boylston Street after the city allowed them to finish the last mile of the race in Boston, Saturday, May 25, 2013. (AP Photo/Winslow Townson) (The Associated Press)

The winner of the men's race at the Boston Marathon says he is returning his winner's medal to honor the city and those killed and injured in the terrorist bombings near the finish line of one of the world's top running events.

Lelisa Desisa says sport should be a pleasure and never a battlefield. He made the announcement Sunday at a ceremony with U.S. Secretary of State John Kerry. Kerry also honored the woman's runner-up and the men's third place finisher. All three athletes are from Ethiopia.

The April 15 explosions killed three people and injured more than 260 others.

Kerry is in Ethiopia to mark the 50th anniversary of the African Union.