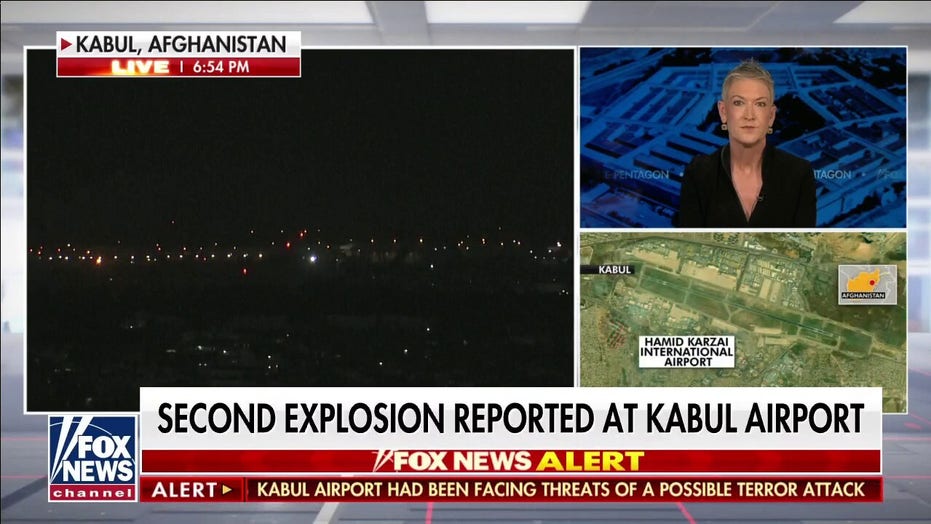 Two explosions outside the Kabul airport Thursday killed at least 12 U.S. service members and injured "dozens" of others as the U.S. attempts to continue its evacuations out of Taliban-controlled Afghanistan.

World leaders have adjusted planned operations in the face of the attacks, which CENTCOM Commander Gen. Kenneth McKenzie Jr. identified as the work of terrorist group ISIS-K.

An official told Fox News that President Biden has been briefed about the explosions, with the president expected to speak at 5 p.m. ET; he has remained silent for several hours after the attacks. A planned meeting between Biden and Israeli Prime Minister Naftali Bennett has been postponed.

German Chancellor Angela Merkel canceled an upcoming trip to Israel, where she was expected to join Bennett for a cabinet meeting on Sunday. The trip was canceled due to "the tense situation in Afghanistan," according to a government spokesperson.

Merkel will remain in Germany to monitor the last stages of the evacuation of German troops, which will end Thursday.

"The Prime Minister has been updated on the situation at the airport in Kabul and will chair a COBR (security meeting) later this afternoon," a No. 10 Downing St. spokesperson said.

Johnson spoke to reporters following the meeting, condemning the attack as "despicable," according to The Guardian.

"We extend our condolences both to the United States of America and the people of Afghanistan," Johnson said. He stressed that Britain will continue its evacuation plan "up until the last moment."

French President Emmanuel Macron has voiced full support for coordinating with "American allies" in response to the explosions, the Irish Times reported.

Macron is in Ireland for a diplomatic visit, but he took time to speak about the tragic events shortly after they occurred.

"We will also closely coordinate on the issues to be dealt with in the near future, military cooperation, migration issues and cooperate with the UN Security Council, because in the coming days and weeks we will have to define the course of the mandate of the United Nations," Macron said. "The coming hours will remain extremely dangerous in Kabul and around the airport."

Canadian Prime Minister Justin Trudeau said it was a "very difficult day" for the people in Afghanistan and those concerned about their safety, and labeled the situation as "heartbreaking."

"Our engagement with Afghanistan is not done," Trudeau pledged. "Our commitment to resettle over 20,000 Afghans in Canada in the following weeks and months - our work to relocate people in the region and put pressure on the Taliban alongside our international allies to allow people to leave Afghanistan and come to safety in Canada will continue."

NATO Secretary-General and former Norwegian Prime Minister Jens Stoltenborg strongly condemned the attacks and expressed condolences for those affected by the attacks.

"I strongly condemn the horrific terrorist attack outside #Kabul airport," Stoltenborg tweeted. "My thoughts are with all those affected and their loved ones. Our priority remains to evacuate as many people to safety as quickly as possible."