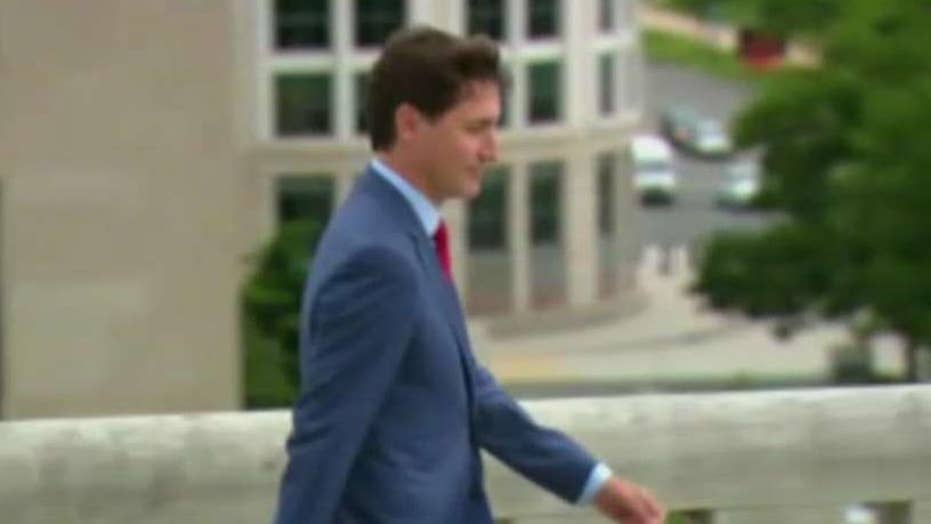 Canada's prime minister attempts to head off what could become a serious scandal as he faces a tough re-election campaign; Laura Ingle reports.

Justin Trudeau on Friday pledged to ban military-style assault rifles, including the AR-15, in Canada as he attempted to get his re-election campaign back on track following a damaging blackface scandal.

Speaking in Toronto on Friday, the Canadian prime minister said new regulations would include a buyback program for all legally purchased assault rifles, as well as a pledge to grant municipalities more powers to restrict or ban handguns within their boundaries.

"Thoughts and prayers aren't going to cut it," Trudeau said in a press conference. "We know you do not need a military-grade assault weapon, one designed to kill the largest number of people in the shortest amount of time, to take down a deer."

Additional background material from Trudeau's Liberal Party said the ban would include the AR-15, a weapon they said is "specifically designed to inflict mass human casualties and [has] no place in Canadian society."

Liberal Leader and Canadian Prime Minister Justin Trudeau makes a policy announcement promising to ban all military-style assault rifles as part of a broader gun-control plan that will also take steps towards restricting and banning handguns in Toronto on Friday, Sept. 20, 2019.  (The Canadian Press via AP)

Trudeau's press conference came in Greektown, which last year saw Faisal Hussain shoot at people in the street, killing 2 and injuring 13 others, before he turned the gun on himself, according to CBC.

The Canadian election campaign has been completely overshadowed by the revelations that Trudeau wore blackface at least three times when he was younger.

He has apologized repeatedly after the damaging pictures and video emerged this week.

On Thursday, he stopped short of saying whether there were more incidents, telling a news conference in Winnipeg: "I am wary of being definitive about this because the recent pictures that came out, I had not remembered."

This April 2001 photo, which appeared in a newsletter from the West Point Grey Academy, shows a costumed Justin Trudeau, his face and hands darkened by makeup, attending an "Arabian Nights" gala. The academy is a private school in Vancouver, B.C., where Trudeau worked as a teacher before entering politics. (West Point Grey Academy/The Canadian Press via AP)

"And, the question is, how can you not remember that? The fact is, I didn't understand how hurtful this is to people who live with discrimination every single day," he said.

The Liberal Party leader and son of former Canadian Prime Minister Pierre Elliott Trudeau also blamed his "place of privilege" for his actions.

"I've always acknowledged that I come from a place of privilege but now I need to acknowledge that that comes with a massive blindspot," he said.

During his apology, he said he has since known dressing up in blackface was "always unacceptable." 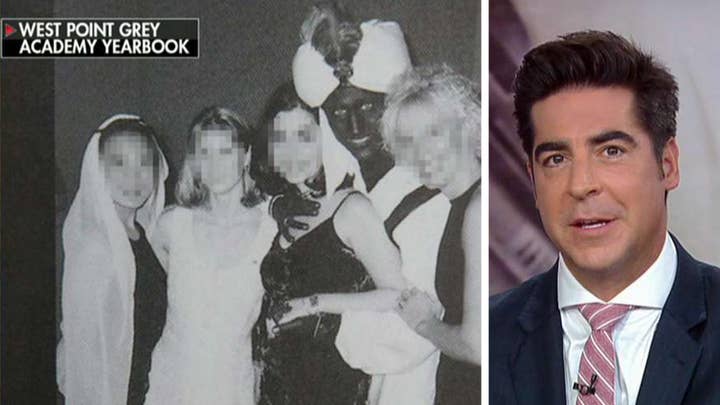 The election campaign was rocked when Time magazine published an image of Trudeau Wednesday, with his face blackened at an "Arabian Nights" party from 2001 when he was a 29-year-old teacher at a school in Vancouver. Two more images subsequently emerged, including a picture of him wearing an afro wig and singing the Jamaican son "Day-O" during a talent show in the early 1990s at Jean Brebeuf High School.

When asked in the Oval Office on Friday, President Trump told reporters he was "surprised" by the photos.

"I was hoping I wouldn’t be asked that question... I'm surprised," Trump said. "I was more surprised when I saw the number of times. And I’ve always had a good relationship with Justin. I just don’t know what to tell you. I was surprised by it, actually."