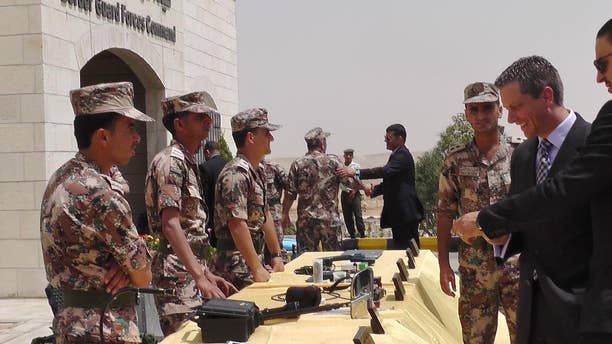 Members of the Jordanian border guard, left, stand behind a table where various devices for first detection of possible chemical or biological weapons materials are displayed for visitors at their headquarters near the city of Zarqa, Jordan on Monday, June 8, 2015. The devices are part of a partially U.S.-funded program to improve Jordan’s surveillance of its borders with Syria and Iraq and to prevent infiltration of militants, including from the extremist group Islamic State, as well as the possible influx of weapons. (AP Photos/Karin Laub) (The Associated Press)

Jordan's military has installed the second phase of a surveillance system that U.S. officials say provides an effective defense against infiltration attempts by Islamic State militants.

Jordan plays a high-profile role in the U.S.-led military coalition against Islamic State which controls large parts of neighboring Syria and Iraq and also poses a threat to the kingdom's security.

The security system unveiled Monday includes a network of radar and surveillance towers that enable Jordanian forces to spot suspected infiltrators several kilometers before they reach the border.

Col. Robert Paddock, the defense attache at the U.S. embassy in Amman, told The Associated Press that with phase two complete, the system now operates along the entire Jordanian-Syrian border and that installation along the Iraqi border will be completed by the end of 2015.