Jews, atheists, a Muslim: A look at the 17 victims of the French terrorist attacks 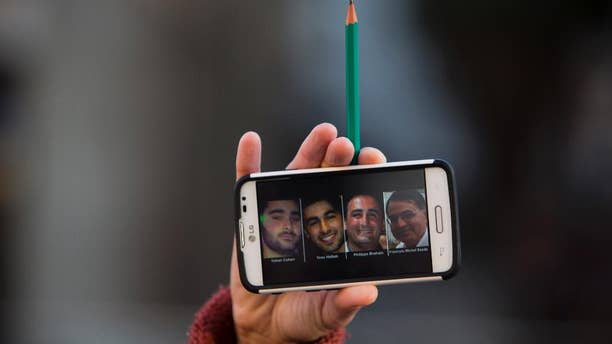 FILE - In this Saturday, Jan. 11, 2015 file photo, a woman holds a pencil and her mobile phone showing four victims killed in an attack on the kosher supermarket in Paris, during a rally in Tel Aviv, Israel. The four Jewish victims of last week's terror attack on a kosher supermarket in Paris were buried on Tuesday in Israel. From left are: Yohan Cohen, Yoav Hattab, Phillippe Braham and Francois-Michel Saada. (AP Photo/Oded Balilty, File) (The Associated Press)

Jews, atheists, a Muslim. Cartoonists, police officers, shoppers. They are among the 17 victims killed in the terrorist attacks last week in France.

Brothers Said and Cherif Kouachi killed 12 in a massacre that started at the satirical weekly Charlie Hebdo in Paris on Jan. 7. Amedy Coulibaly shot a policewoman the following day and murdered four others in the attack against a kosher grocery store on Jan. 9.

All three attackers were shot by police. Here are some details about the victims:

Stephane Charbonnier, 47, known professionally as Charb, was the chief editor of Charlie Hebdo, as well as one of its top cartoonists and a stout defender of its provocative approach. He was assigned a bodyguard after the paper's offices were destroyed by a firebomb in 2011 when it had proposed inviting the Prophet Muhammad to be a guest editor. Charbonnier defiantly held up a copy of the paper as he stood amid debris. In an interview with The Associated Press, he suggested the attackers "are themselves unbelievers ... idiots who betray their own religion." In 2012, the paper again provoked controversy by publishing crude caricatures of Muhammad. Shortly after, Charbonnier told leading French newspaper Le Monde "I'd rather die standing than live on my knees."

Wolinski, 80, was another of Charlie Hebdo's veteran cartoonists. His works had appeared in weekly magazine Paris Match, satirical magazine Hara-Kiri — considered a forerunner of Charlie Hebdo — and numerous other publications. He was born in Tunisia and moved to France as a schoolboy. By age 26, he was working for Hara-Kiri. He was awarded the Legion of Honor, France's highest decoration, in 2005.

Jean Cabut, 76, widely known as Cabu, established himself as one of France's most famous cartoonists over a career that spanned 60 years. He served in the French military during the Algerian war for independence in the late 1950s, and later drew cartoons for several media outlets. Among them was Hara-Kiri and a fondly remembered children's program on state television in the 1980s. One of Cabut's recurring characters was the Grand Duduche, a skinny, blond schoolboy bearing some resemblance to Cabut himself.

Cartoonist Bernard Verlhac, who drew under the name Tignous, was born in Paris in 1957 and published his first works in 1980. He was a member of a group of artists called Cartoonists for Peace and also belonged to the Association de la Presse Judiciaire, an association of French journalists covering the courts. He sent his last drawing — a self-portrait wishing Happy New Year — to the association the night before his death. It was posted on the group's website on the day of the shooting.

Bernard Maris, 68, gained prominence as both an economist and a journalist. He wrote a weekly column in Charlie Hebdo called "Uncle Bernard," was a regular commentator on economics for the France Inter radio network, and taught economics at a branch of the University of Paris. He was also a member of the General Council of the Bank of France. "Bernard Maris was a man of heart, of culture and of great tolerance," the bank's president, Christian Noyer said in a statement.

Known for his black-and-white cartoons with thick strokes, Honore drew the last picture that was posted on Charlie Hebdo's Twitter account, moments before the killing. It depicted Abu Bakr al-Baghdadi, leader of the Islamic State group, sending New Year wishes with the words "above all, good health!" The 73-year-old cartoonist had worked for the satirical weekly since 1992. He was also published in leading French newspapers like Le Monde and Liberation. "He was enraged, but a very polite and soft-speaking enraged person," cartoonist Plantu said of Honore in French daily Le Monde. "He expressed his violence through his strokes."

Merabet was born in France to parents of Algerian origin. The 40-year-old Muslim police officer lived in Paris suburb Livry-Gargan and colleagues called him "exemplary." French President Fracois Hollande said "he was proud to represent the French police, the values of the nation."

He was shot dead on the sidewalk by one of the assailants as they left the Charlie Hebdo offices. As details about his death became known, a campaign of solidarity quickly spread on social media, using the phrase "Je Suis Ahmed" — "I Am Ahmed." That echoed the campaign of support for the satirical newspaper that spread widely after the attack, using the slogan "Je Suis Charlie."

Merabet also drew attention at the United Nations. "He himself was a Muslim," U.N. Secretary-General Ban Ki-moon told reporters. "This is yet another reminder of what we are facing together. It should never be seen as a war of religion, for religion, or on religion. It is an assault on our common humanity, designed to terrify and incite."

Brinsolaro was a married police veteran who served on the bodyguard detail for the murdered editor of Charlie Hebdo, Stephane Charbonnier. A union official said Charbonnier would sometimes invite Brinsolaro for meals at the famed Closerie des Lilas restaurant in southern Paris. Brinsolaro, 48, was married to Ingrid, the chief editor of L'Eveil Normand, a weekly newspaper in northern France, and the couple had a 1-year-old daughter. In 1996, he helped evacuate 46 French citizens under the threat of the Taliban in Afghanistan.

Ourrad was a copy editor at Charlie Hebdo. Born in Algeria and proud of his Kabyle ethnic group background, he moved to France in the mid-1970s. Ourrad was known for his love of literature. The 60-year-old father of two also worked for women's magazine Viva.

A psychoanalyst, Cayat wrote a column twice a month for Charlie Hebdo on various topics ranging from the origins of the Holocaust to parental authority. The 54-year-old Jewish woman was a heavy smoker and wrote books on desire, love and sexuality. "She wasn't a smooth woman," one of her patients, Emmanuel Chaussade, told French magazine Paris Match. "She could be a bit brutal and push you to the limit."

Boisseau was the first victim of the Kouachi brothers. The terrorists shot the 42-year-old Boisseau at the entrance of the building where Charlie Hebdo is located. The maintenance worker was the father of two teenagers.

Retiree Renaud, 69, was invited to attend the editorial meeting of the Charlie Hebdo staff. He was visiting the satirical newspaper to return cartoons he had borrowed for a festival about travel and foreign cultures in the city Clermont-Ferrand that he helped promote. Before his retirement Renaud worked at the communication department of the Clermont-Ferrand city hall, in the center of France, but had also worked as a journalist.

Jean-Philippe was shot in the back by Amedy Coulibaly near a Jewish school in the southern Paris suburb of Montrouge. Born in Martinique, a French island in the Caribbean, the 26-year-old woman was completing her training and was set to receive her municipal police diploma this week. "Despite her discretion, she had a strong presence," policewoman Sylvia Vandini told French daily Le Parisien. "She wasn't the one doing the talking within the group, but she helped several trainees who were struggling more than her."

Cohen worked at the kosher grocery store attacked by Amedy Coulibaly. He loved rap music. His parents left North Africa in the 1960s to settle in the northern Paris suburb of Sarcelles. The 22-year-old Jew was friends on Facebook with his colleague Lassana Bathily, a Muslim who saved the lives of shoppers by turning off the stockroom's freezer and hiding them inside before sneaking out through a fire escape to brief police on the hostage-taker upstairs.

Hattab finished high school in Tunisia before moving to Paris to seek a business degree in marketing. The 21-year-old was the son of the Tunis chief rabbi. He was killed while attempting to snatch one of Coulibaly's weapons, according to witnesses quoted in various French news media.

Saada, a retiree in his 60s, was killed while buying goods for the Sabbath. Born in Tunis, the former senior manager was married to Laurence, a teacher. Their two children, Jonathan and Emilie, both live in Israel.