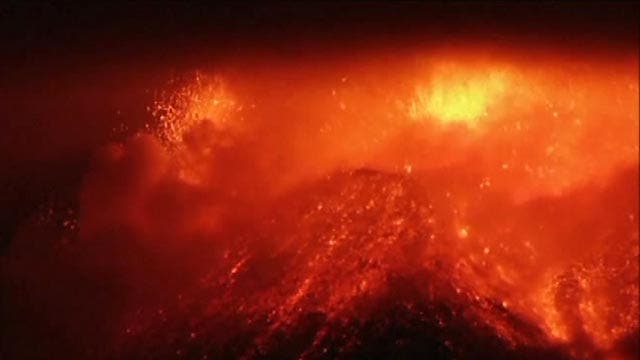 Belching out a towering cloud of ash and lava stone onto Sicilian villages, Italy’s Mount Etna volcano erupted with a spectacular blast again this weekend, the latest in a series of explosions in the last month.

The moon is partially seen in the sky as lava flows from the Mt. Etna volcano, near Catania in Sicily, southern Italy, early Tuesday, Feb. 23 , 2021.  (AP Photo/Salvatore Allegra)

Italy’s national geophysics and volcanology institute INGV said the powerful explosion at 2 a.m. Sunday was the 10th such big blast since Feb. 16, when Europe’s most active volcano started giving off an impressive demonstration of nature’s fire power, coloring the night sky in shocking hues of orange and red.

The column of ash and lava reached a height of 33,000 feet on Sunday, according to scientists who monitor volcanic activity with specialized instruments from an observatory at Etna in eastern Sicily.

By mid-morning, Etna’s latest display of activity had slowed somewhat with the lava flow ending, although the volcano was still puffing out "weak emission of ash" from the southeast crater. A few hours later, the volcanic tremors picked up again, INGV said in a statement.

Increasing tremors rattled the mountain throughout much of the previous night. Ash and small lava stones rained down on eight villages on Etna’s slopes Sunday morning, while lava flowed from the southeast crater slowly down an uninhabited side, as it has been doing for the last three weeks, the institute said.

Locals swept ash and lava stones from their front steps and balconies. They have taken to covering cars parked outdoors with carpets, blankets and sheets of cardboard to make cleanup easier after each blast. Winds helped carry the ash eastward, INGV said.

No injuries or serious damage have been reported after the recent blasts. Geologically active, Etna has a history of occasionally becoming particularly noisy and explosive.

FILE - In this Wednesday, Feb. 24, 2021 file photo, a fiery river of glowing lava flows on the north-east side of the Mt. Etna volcano engulfed with ashes and smoke near Milo, Sicily.  (AP Photo/Salvatore Allegra, File )

The INGV scientists say there is no way of predicting when this current round of particularly robust volcanic activity might subside.