Italian police said Thursday that they had seized weapons and far-right propaganda material from the homes of 19 suspected extremists who were hoping to form a Nazi party in the country.

The Polizia di Stato said that searches had taken place in 16 cities and towns, including Milan, Genoa, Livorno, Turin, Padua and Verona.

It was not immediately clear how many people, if any, were arrested and police gave no estimate of how many people were members of the self-styled Italian National Socialist Workers Party. 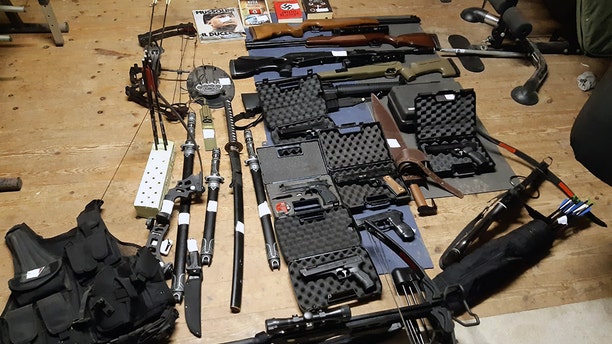 Some of the weapons and other items seized in the raids. (Twitter/Polizia di Stato)

Authorities said the raids, dubbed "Operation Black Shadows," stemmed from "the monitoring of extreme right-wing local groups all united by the same ideological fanaticism and intending to constitute a pro-Nazi, xenophobic and anti-Semitic movement." They added that some suspects "had a vast amount of weapons and explosives at their disposal" while others tried to recruit new members by posting anti-Semitic and Holocaust-denying material on social media.

The Italian news agency ANSA identified a senior member of the group as a 50-year-old woman from Padua who police say called herself "Hitler's Sergeant Major" in private group chats. Another reported suspect is a 26-year-old woman from Sicily who won an online "Miss Hitler" beauty contest and spoke at a far-right conference in Lisbon this past August.

GERMAN CITY OF DRESDEN DECLARES IT HAS 'NAZI EMERGENCY'

Police identified one suspect as a former convict believed to be a senior figure in the 'Ndrangheta mafia and a former member of the Forza Nuova (New Force) far-right party.

Authorities said the group had made contact with far-right parties in Portugal, Britain and France.

It is illegal under Italian law to try to revive fascist parties or practice "defense of fascism."

A survey published last week by the Anti-Defamation League found that 18 percent of Italians held anti-Semitic attitudes, down from 29 percent in 2015. However, activists say anti-Semitic attacks in Italy are on the rise, especially online. 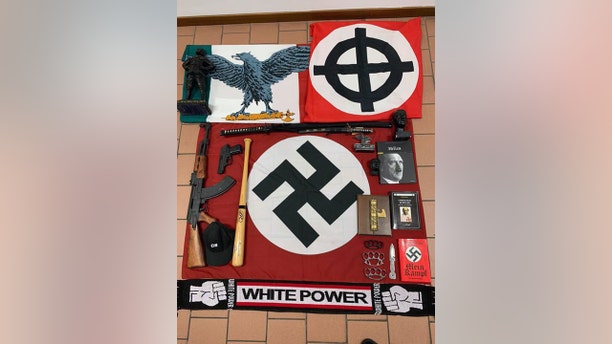 Nazi flags, books and other paraphernalia were among the items seized.   (Polizia di Stato)

Earlier this month, 89-year-old senator-for-life Liliana Segre, a Holocaust survivor, was given police protection after revealing that she received 200 social media attacks each day. Segre had called for the creation of a parliamentary committee to combat hate, racism and anti-Semitism. Parliament approved her motion — but without votes from Italy’s three main right-wing parties.