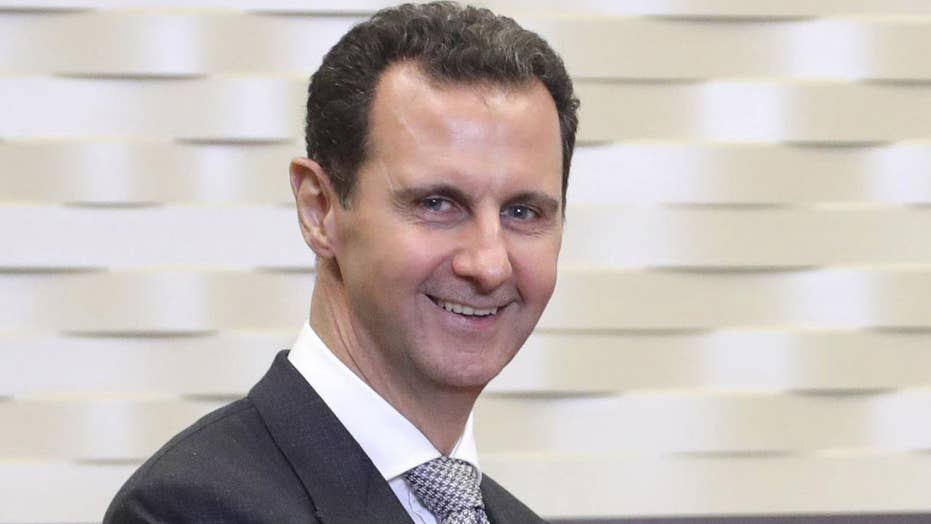 How Assad is complicating the situation in Syria

When Italian authorities announced last week that they had seized 15.4 tons of counterfeit Captagon produced by ISIS in Syria to fund terrorism, it was lauded as one of the largest drug busts in history.

However, many are now questioning the narrative with claims that the drugs stemmed from the Syrian regime and its much more extensive network of smuggling partners.

The stash of 84 million pills, valued at an estimated $1.12 billion in market value and bound for distribution in Europe by "different organized crime groups," was so aptly concealed in three container ships that airport scanners did not detect them, Commander Domenico Napolitano of the Naples financial police told the press.

ITALY CONFISCATES $1B WORTH OF AMPHETAMINES MADE BY ISIS IN SYRIA

However, the seizure at Salerno's port was triggered after several calls by a local crime outfit were intercepted.

Throughout its reign in Iraq and Syria between 2014 and 2018, ISIS was known to issue Captagon - a combination of amphetamine and an array of other chemicals, sometimes referred to as a "super-soldier" pill, as it sends fighters to extreme and euphoric highs, making them feel invincible on the battlefield. However, the terrorist group was not known to have manufactured drug, even at its territorial peak.

Thus, multiple sources told Fox News that all fingers point to the Bashar al-Assad government in Syria and their Hezbollah affiliates, who have long been known to deal in drug smuggling circles and are well-entrenched in the global Captagon trade.

This image taken from a video shows customs police unloading amphetamines that were seized at the Salerno harbor, southern Italy, Wednesday, July 1, 2020. Italian police have seized 14 tons of amphetamines, allegedly produced in Syria by Islamic State group to fund terrorist activities and destined for the European illegal drug market. Customs Police Col. Domenico Napolitano on Wednesday called the discovery of three shipping containers crammed with some 85 million pills, in the southern port of Salerno, the biggest amphetamine seizure ever made worldwide. (Guardia di Finanza via AP)

"ISIS today are small groups separated geographically in the deserts of Iraq and Syria, as they no longer have the ability to produce this huge amount of drugs," Turkey-based Syrian journalist and political analyst, Marwan Farzat, told Fox News. "Nor does ISIS have the ability to import the active substance that goes into making the Captagon, nor the ability to bring this type of paper – flute paper – (that it was wrapped in.) Nor the ability to hide the drugs inside it because it needs huge and more high tech machines in order to hide or wrap the Captagon."

The captured shipment in Naples is said to have originated in the Syrian port of Latakia, which is entirely under Assad's control. According to The National, Iran also leased part of the port last year and could also be profiting from trafficking.

"Exporting through the port of Latakia is something that ISIS is unable to do even at the height of its power," Farzat contended.

This isn't the first cargo to have been thwarted coming from that very same location, and nor is it the first time the Assad family has been linked to the illicit industry.

Jan. 28, 2016: Russian warplanes fly in the sky over the Mediterranean coastal city of Latakia (Reuters)

In April, authorities in Egypt discovered hashish veiled in milk cartons made by prominent Syrian businessman Rami Makhlouf, a cousin of Assad who – up until a recent falling out – was one of his closest confidantes. Two months prior, another confiscation of the drug took place in Dubai, the point of origin also linked to the Latakia port.

"Billionaire Rami Makhlouf and Assad's brother, Maher Assad, and other family have long been involved in the drug trade. Maher works extensively with Hezbollah, and Hezbollah has a long history in the drug trade," noted Royce de Melo, a Middle East-based security and defense consultant. "Backed by Syria and Iran for decades, Hezbollah is Syria and the Assad family's front and channel to the criminal world."

Last July, following a tip from the U.S. Drug Enforcement Administration (DEA), Greek authorities unearthed 60 pallets of Capaton pills in Piraeus. Accompanying documents showed that the narcotics had been boarded in Latakia.

The drug Captagon is sometimes referred to as the "super soldiers pill." (Kurdish Information Ministry)

Saudi border guards also claimed to have foiled an attempt to sneak Captagon into the Kingdom this past Sunday from Jordan, of which Syrian analysts said has been used by regime accomplices in the past for drug missions.

THE RISE AND FALL OF SYRIA'S FIRST LADY: WHY THE US IS GOING AFTER ASMA ASSAD?

According to reports, Syrian pharmacists were trained to produce the drug by the Soviet Union for export during the Cold War era.

Moreover, a former Syrian military official with knowledge of Damascus's inner-workings, who spoke on the condition of anonymity, affirmed that the tablets were carefully concealed inside paper rolls requiring professional-grade machinery and manufacture of which ISIS is not known to possess.

The source further explained that traditionally, some of the ingredients are brought to the Syrian city of Homs to make the drugs, and some of the materials are distributed to Hezbollah connections in neighboring Lebanon.

"It is a combined effort between the regime and Hezbollah, but the transport happens exclusively under the Assad family's seaport," the insider said. "For shipments to Europe, they usually go to either Greece, Italy, Malta or Albani. From there, they can enter and reach all of Europe."

Fighters with the Lebanese Shiite Hezbollah party, carry flags as they parade in a southern suburb of the capital Beirut, to mark the al-Quds (Jerusalem) International Day, on May 31, 2019. - An initiative started by the late Iranian revolutionary leader Ayatollah Ruhollah Khomeini, Quds Day is held annually on the last Friday of the Muslim fasting month of Ramadan and calls for Jerusalem to be returned to the Palestinians. (Photo by Anwar AMRO / AFP) (Photo credit should read ANWAR AMRO/AFP/Getty Images)

Farzat also noted that before the revolution, which was ignited in 2011, the ruling Assad family was in cohorts with the drug dealers in Syria, but at that point, they were not involved in the manufacturing of drugs.

Farzat said initially the government's "goal in the drug industry was not only material gain but to seek revenge against the countries that supported the revolution," in 2012. However, after the formation of pro-regime national defense, the drug industry became one of the primary sources of funding for associated militias.

Laila Kiki, executive director of Washington-based The Syria Campaign, concurred that the shipment came from an official port – far from where ISIS fighters are said to be scattered through the arid desert. She also stressed that while the stimulant has typically been associated with jihadists, Syrian soldiers have been known to consume it too – forcibly or otherwise.

LEADING IRAQI EXPERT ON ISIS, OTHER MILITANT GROUPS SHOT OUTSIDE HIS HOME

The Italian Ministry of Interior did not respond to a request for further comment, and it remains unclear whether any further investigation is still underway. Nonetheless, experts conclude that there are multiple reasons why fingers were quickly pointed at ISIS as opposed to Damascus.

"It is clear that Italian organized crime groups must have been involved to move such a huge shipment of drugs," observed Jim Phillips, a senior research fellow for Middle Eastern affairs at The Heritage Foundation. "Perhaps the Italian government concluded that attributing the smuggling to ISIS would inflict a higher reputational cost on Italian criminal groups participating in the smuggling than blaming Hezbollah or Syria."

Tony Schiena, chairman of Mosaic Security, highlighted that it is merely easier to implicate a terrorist group rather than a government.

"I doubt this (drug operation) is ISIS for many reasons and believe from a logistics stand-point, Assad and Hezbollah have greater capabilities to move contraband materials like drugs," he explained. "A government would definitely use proxies and secret funding mechanisms if they were to distribute or sell contraband for whatever reason to have plausible deniability."

However, de Melo also underscored that the drug trade in the Middle East is far from clear cut, and enemies often work together to make a buck.

"This sort of business can get quite convoluted," he added. "If this was an ISIS drug shipment, considering the way it was packed for shipping and the size of the shipment, maybe it was stolen by IS and resold. Anything is possible."