Israel’s military announced Friday that it had carried out a series of airstrikes on a terrorist group’s facilities in Gaza hours after a barrage of rockets were fired into its territory.

The strikes in the early-morning hours hit a compound, rocket-manufacturing site and headquarters of the Islamic Jihad militant group in the town of Khan Younis, the Associated Press reported, citing a statement from Israel’s army.

A separate Israeli airstrike carried out in Deir al-Balah is reported to have killed eight people, including two women and five children under the age of 13. That strike apparently targeted the home of an Islamic Jihad commander who was not there at the time, the AP says.

Israel’s military said it struck "Islamic Jihad military infrastructure" there – but did not intend to harm civilians. 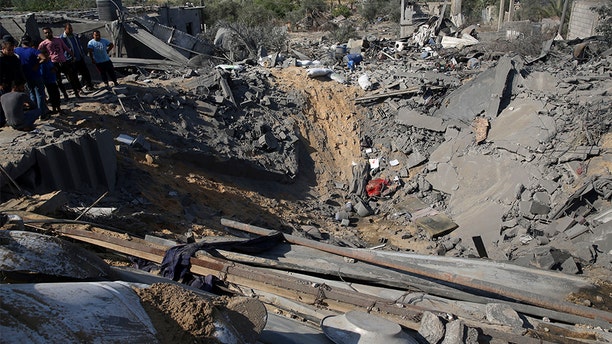 "According to the information available to the IDF at the time of the strike, no civilians were expected to be harmed as a result of the strike," the Israeli Defense Forces said in a statement, adding that an investigation is now underway.

The military maneuvers were carried out after a barrage of rockets were fired into Israel from Gaza late Thursday. Israel said those missiles were intercepted by its defense systems and may have been an expression of discontent with the militant group’s leadership after they announced the Egyptian-brokered cease-fire between the two sides.

Tensions between Israel and the Islamic Jihad group have been escalating in recent days following Israel’s assassination of one of its commanders, Baha Abu al-Ata, and his wife on Tuesday.

"Baha Abu al-Ata was the senior commander of Islamic Jihad in Gaza, responsible for most attacks emanating from Gaza over the last year," IDF Chief of General Staff Lt. Gen. Aviv Kohavi said. "He was a ticking time-bomb... there was a window of opportunity that we utilized precisely."

The killing sparked a surge in cross-border fighting that left 34 Palestinians, including 16 civilians, dead, before the cease-fire deal was reached Thursday. Palestinian militants fired more than 450 rockets toward Israel during the 48-hour flare-up, paralyzing much of southern Israel without causing any deaths or serious injuries.

Israel, in response, said 90 percent of those rockets were intercepted by its Iron Dome missile defense system, while some 25 Islamic Jihad members have been “eliminated.”

As of Friday afternoon, the situation appears to be calm along the Israel-Gaza border, the Associated Press reports. The Palestinian territory’s Hamas rulers, who kept to the sidelines of this week’s fighting,  also canceled the weekly protests they organize along the perimeter fence without explanation — apparently in an effort to preserve the halt in fighting.

Both militant groups are committed to Israel’s destruction, but Islamic Jihad is seen as more radical and has closer ties to Iran.