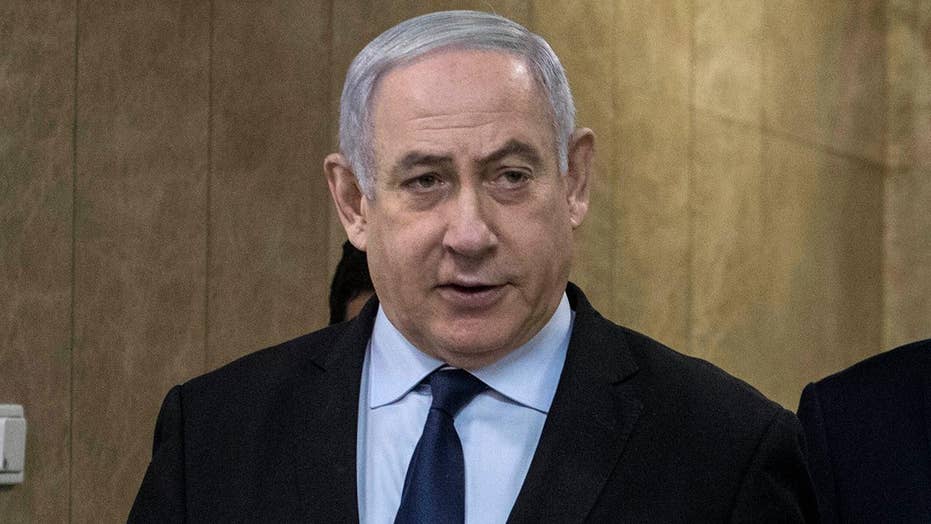 Netanyahu rushed to shelter during visit to the southern Israeli city of Ashkelon; Trey Yingst reports from Jerusalem.

Israel’s Prime Minister Benjamin Netanyahu was rushed off stage and into a bomb shelter during a campaign event after the Israel Defense Forces (IDF) confirmed at least one rocket was fired into the country.

The IDF tweeted Wednesday, “On Hanukkah, the festival of miracles, Israel's modern miracle—the Iron Dome—just intercepted a rocket mid-air after it was fired from #Gaza at Israeli civilians.”

In another tweet on Wednesday the IDF wrote, “In response to the rocket fired from #Gaza at Israeli civilians earlier tonight, the Israeli Air Force just struck a number of Hamas terror targets in Gaza.”

Netanyahu, the leader of the Likud party, was rushed off stage to a shelter as sirens sounded in the city of Ashkelon, which is about an hour from Jerusalem, where the premier was holding an event, the Jerusalem Post reported.

The culture minister took the stage in his place and several other Likud officials who were at the event were not brought to a shelter, the newspaper reported, adding that Netanyahu returned to the stage shortly afterward.

"The person that shot at us before is no longer with us. Whoever shot at us now should pack up his belongings," Netanyahu reportedly said after he returned. He was referring to Islamic Jihad senior commander Bahu Abu al-Ata, who was killed as he slept in his home in eastern Gaza last month. Ata was responsible for a number of recent rocket attacks on southern Israel and had been planning new attacks, according to the IDF. Ata’s killing sparked two days of violence between Israel and Gaza.

A similar incident happened in the Israeli city of Ashdod this past September when rocket sirens were fired as Netanyahu held a campaign event there, the Post reported.

Wednesday’s rocket attack into southern Israel came as the Likud Party was preparing to hold its primary Thursday, choosing between Netanyahu and upstart challenger Gideon Saar. Israel has been gearing up for its third election in one year -- for the first time in the country’s history -- after Israel’s parliament failed to form a governing coalition.

Ganz tweeted Wednesday after the attack, writing, “The situation in which Israeli citizens are at the mercy of terrorists, and the Israeli prime minister cannot patrol part of his country is a certificate of poverty for the southern security policy, and a loss of deterrence that no sovereign state can accept.”

He added, “We will replace the government, change the policy and restore deterrence and quiet to the people of the south.”

Fox News' Trey Yingst in Jerusalem contributed to this report.