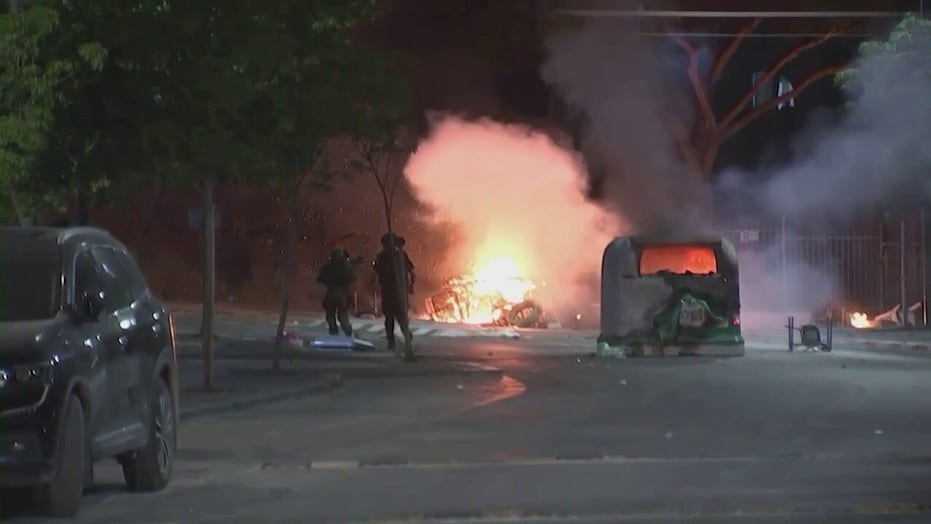 The violent conflict between Israelis and Palestinian militants this week sent rockets flying and buildings crumbling under targeted airstrikes, but for some residents of cities like Lod with mixed Arab and Jewish populations, the riots and mobs in their streets are more worrying.

"I don’t have a problem with my Jewish neighbor nor any other Jew who lives in Israel. My problem is with the settlers that see us as flies. They don’t see us as humans," 70-year-old Palestinian Yousef Sharaya tells Fox News in Hebrew, his voice trembling with emotion and anger.  He indicated he has always felt a part of his surroundings in Israel, had a civic spirit. But on Thursday, he was sporting a large scab on his forehead from stones hurled through his window as he tried to sleep through disturbances that have roiled his town this week.

Lod in central Israel and several other cities with mixed Arab and Jewish populations have exploded into violence in recent days with extreme Jews and Arabs hunting each other down in their own neighborhoods. Sharaya blamed Jewish settlers, interlopers he claimed have been coming to town to threaten Arabs and stir the pot. His wife Hajar was hit worse. The cuts on her head were deeper. Their son Mohammad said even though they are not even safe in their house, they are now afraid to leave it.

"This is the definition of terror," he said. "We are not the terrorists. We are defending our homes here."

Israeli Arabs gather next to a mosque during clashes between Jews, Israeli police and Arabs, in the mixed town of Lod, central Israel, Wednesday, May 12, 2021. (AP Photo/Heidi Levine)

And some men with their faces covered were protecting the mosque. They stood on the roof looking down for those who might threaten them. Thursday started the Muslim holiday Eid, ending the holy month of Ramadan.

Nearby, police conferred with the imam in his long white robe. The Arab community was asking for more protection. Shortly after their huddle, the police sent a few men in yarmulkes approaching the mosque away from this corner of Lod.

Not far from there, in a sort of community center, what looks like a situation room buzzed with activity as outwardly religious Jews organized themselves. Some had guns. Others rolled up maps of Israel, part of an art project. The rest fueled up on pizza. They have been mobilized by the Jewish community of Lod to protect Jews.

"I’ve been living in Lod 15 years. That’s my hometown. It’s where I raised my kids. That’s my place. The last three days everything is just turned around," Ayelet-Chen Wadler told Fox News, also visibly distressed. She said that Jewish homes have been attacked, and synagogues and Jewish schools burned or otherwise vandalized.

Israeli security forces and paramedics carry a wounded Jewish man after he was shot during violent unrest in Lod, Israel, Thursday, May 13, 2021.  (AP Photo/Ofer Vaknin)

NETANYAHU CALLS STATE OF EMERGENCY AFTER VIOLENT CLASHES IN LOD

"It’s extremely disturbing to feel that the place you call home and that you’re used to walking around the streets feeling safe and happy suddenly turns into a place where you are scared," she said.

She also said the police are not protecting them adequately and hence the community has organized this protection squad.

The protection squad will no doubt be seen as a provocation by Arabs in town. But Wadler said enough is enough.

People on both sides have been beaten with blunt objects, dragged from vehicles, called insulting names and pelted with stones. Wadler said there has been gunfire too. All of this an aspect of the extraordinary escalation of tensions in the past few weeks that some say is more troubling than the rocket fire, which at some point will presumably stop.

Israeli police patrol during clashes between Arabs, police and Jews, in the mixed town of Lod, central Israel, Wednesday, May 12, 2021.  (AP Photo/Heidi Levine)

"I do not know why this has happened," Wadler said. "I do not know. It’s extremely unsettling. Once it’ll be finished, there’s a lot of rebuilding and a lot of fixing to be done. Because the feeling of safety we used to have here, I don’t know how easy it will be to create it again."

Each side blames the other. And perhaps both wear rose-colored lenses looking at what was just one week ago. Mohammad Sharaya stressed what good neighbors they all were before Monday, putting aside the reality that Palestinians like himself living within the confines of Israel often feel like second-class citizens.  And he forgot the fact that there are plenty of issues that divide the Arabs and Jews who live within the Jewish state. But both sides seem willing to gloss over that as they try to get a grip on a situation that spread out of control this week and bring back what now seem like pretty good times.