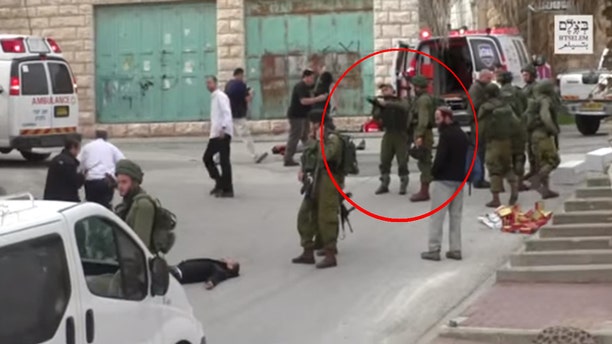 Circled in red: An Israeli soldier seen holding a gun before firing at a Palestinian protester on the ground. (Emad abu-Shamsiyah, B'Tselem)

The Israeli military on Thursday detained a soldier who was captured on video shooting an injured Palestinian who was lying on the ground.

The army said the incident took place in the West Bank city of Hebron after two Palestinians stabbed and wounded an Israeli soldier. It said that troops then shot and killed the pair.

In a video released by the Israeli human rights group B'tselem, one of the attackers appears to still be alive after the initial shooting. The video, taken by a Palestinian volunteer for the group, shows the wounded Palestinian lying on the ground, slowly moving his head at one point. About a minute later, a soldier raises his rifle, cocks the weapon and fires. Blood is then seen streaming from the Palestinian's head.

Military spokesman Lt. Col. Peter Lerner called the incident a "grave breach" of army values. Military police have detained the soldier, which Lerner called an "extraordinary" measure, and are investigating the incident, he said. The military said the investigation began before the video surfaced.

The incident comes amid a six-month wave of Palestinian stabbings, shootings and car-ramming attacks that has killed 28 Israelis and two Americans. Over the same time, at least 188 Palestinians have died by Israeli fire. Israel says most of them were attackers, and the rest died in clashes with Israeli security forces.

Israel blames the attacks on incitement by Palestinian leaders and social media. Palestinians say the violence stems from frustration at nearly five decades of Israeli military occupation. The Palestinians have also accused Israel of using excessive force and killing assailants who have already been stopped or wounded.

"Israel has turned in recent months into a place in which executions are carried out in public with the encouragement of cheering mobs," said Ayman Odeh, leader of a bloc of Arab parties in the Israeli parliament.