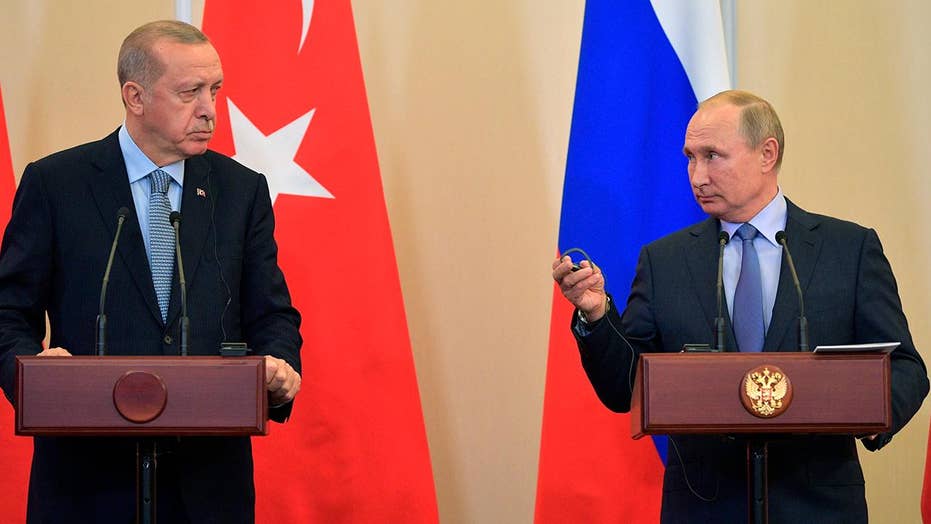 Russian troops have mobilized by land and air, pushing north to take control of key areas on the Syria border; Benjamin Hall reports from Erbil, Iraq.

More than 100 Islamic State militants who were being held in Kurdish prisons in Syria are now on the loose following Turkey’s invasion there, President Trump’s Special Representative for Syria Engagement revealed Wednesday.

"Let me ask you this: How many ISIS detainees have escaped? Does the U.S. have an idea where these individuals are?" Rep. Eliot Engel, D-N.Y., asked Jeffrey during a hearing on Capitol Hill.

"We would say that the number is now over 100,” he responded. “We do not know where they are.”

Jeffrey added that “almost all” of the prisons that the Kurdish forces have been guarding are secured and that U.S. officials are monitoring the situation “as best as we can.”

Before Turkey started carrying out a military operation in Syria on Oct. 9, Kurdish officials had been warning that such a prison breakout was possible.

The Kurds are estimated to be holding around 12,000 militants captured in the war against ISIS.

Jeffrey's admission came hours before President Trump announced that conditions have been met between Turkey and the Kurdish-led Syrian Democratic Forces (SDF) for what he called a " permanent ceasefire" between the two sides and that the United States is lifting sanctions on Ankara that were implemented following the invasion of northern Syria.

Speaking at the White House, Trump said that while a "permanent ceasefire" will be tough to maintain in the volatile region, he hopes that it will last and end the conflict between Turkey and the Kurds.

"I do believe it will be permanent," he said. "This was an outcome created by us, the United States, and nobody else...we've done something very, very special"