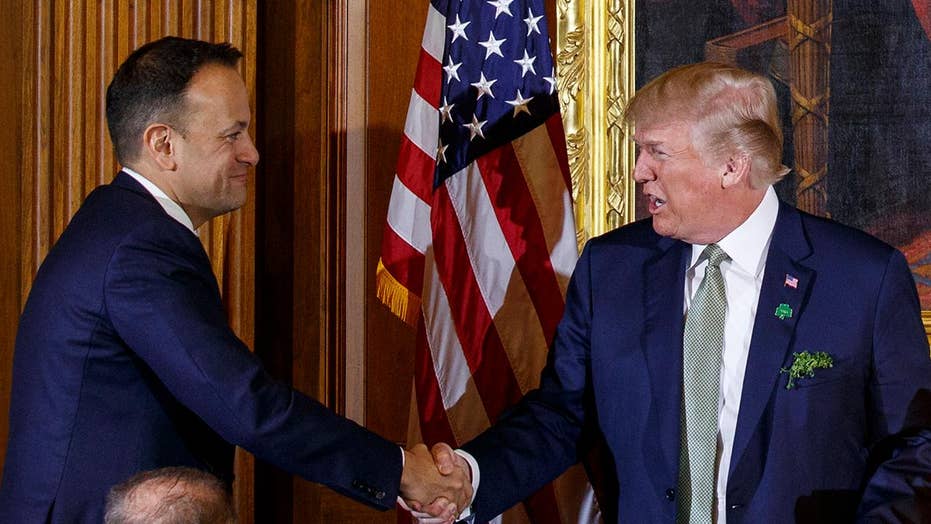 President Trump: St. Patrick's Day is a time to build upon our relationship with Ireland.

Fine Gael leader Leo Varadkar, the current Taoiseach, formally resigned as prime minister after the votes but will stay on as caretaker leader until a successor is chosen. He’s due to travel to Washington, D.C., next month for the traditional St. Patrick’s Day visit to the White House by Ireland’s leader.

"The responsibility is now on all of us to provide good government and, indeed good opposition, because that's what the people have every right to expect," he said. "The government will continue to carry out its duties until a new government has been appointed. I will likewise continue as Taoiseach until the election of that new government."

Fine Gael leader Leo Varadkar, the current Taoiseach, formally resigned as prime minister after the votes, but will stay on as caretaker leader until a successor is chosen. (Liam McBurney/PA via AP)

Talks among the parties have failed to make much progress since the Feb. 8 election, which brought a breakthrough for left-wing nationalists Sinn Fein at the expense of the two long-dominant centrist parties, Fianna Fail and Fine Gael.

Thursday’s session opened with the election of a speaker, followed by parties nominating their candidates for Taoiseach, or prime minister.

Sinn Fein leader Mary Lou McDonald, Fianna Fail leader Micheal Martin and Varadkar were all nominated to the top post, but none secured enough votes to be elected.

The election result was a major blow for Fianna Fail and Fine Gael, which have dominated Irish politics since the country won independence from Britain a century ago.

The two parties have long shunned Sinn Fein because of its historic links to the Irish Republican Army and decades of violence in Northern Ireland.

But Sinn Fein’s radical proposals for tackling Ireland’s housing crisis and creaking health care system proved a powerful draw for young voters in a country that is still dealing with aftershocks of the 2008 global financial crisis, which hammered its debt-driven “Celtic Tiger” economy.