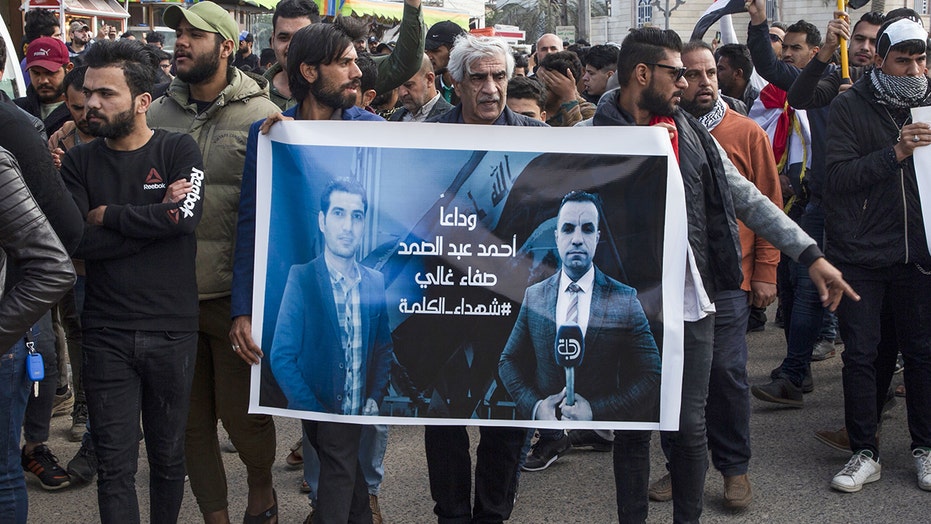 An Iraqi journalist and his cameraman were shot dead by unknown gunmen on Friday while covering anti-government demonstrations in Iraq’s southern city of Basra, officials said.

The U.S. Embassy in Baghdad confirmed the “assassinations” of Ahmen Abdel Samad, a correspondent with Iraqi cable news outlet Dijla TV, and cameraman Safaa Ghali in a statement on Saturday.

Samad was found dead in his car outside a police station with a gunshot wound to the head, a security official told The Associated Press. Graphic video of Samad slumped over in the car with a wound to his head was posted to Dijla TV’s website. It also showed what appeared to be three bullet holes in the front door of the car.

Ghali was rushed to a hospital in critical condition, but later died.

The embassy condemned the killings as “deplorable” and “cowardly.”

“The ongoing assassinations, kidnappings, harassment, and intimidation of members of the press, social media activists, and pro-reform activists in Iraq by armed groups cannot continue to go unpunished,” the embassy said.

The embassy said it is the Iraqi government’s responsibility to uphold the right to freedom of expression, protect journalists and ensure that activists can demonstrate peacefully without fear of repercussions.

“This can only happen if the perpetrators are found and brought to justice,” the embassy said.

It remains unclear who or which group carried out the killings.

Hours before his death, he posted a video critical of how Iraqi security forces arrested protesters in Basra but did not arrest or beat those protesting in front of the U.S. Embassy in Baghdad, according to the Committee to Protect Journalists.

Days earlier, he tweeted that Iran was using the daughter of Gen. Qassem Soleimani, who was killed in a U.S. airstrike earlier this month, to incite vengeance.

“Iran they are taking advantage of everything for the proxy war,” he wrote.

The alleged assassinations come nearly two years after the high-profile killing of Washington Post columnist Jamal Khashoggi in the Saudi Consulate in Istanbul by a team of Saudi agents. Khashoggi had voiced criticisms of the Saudi government.