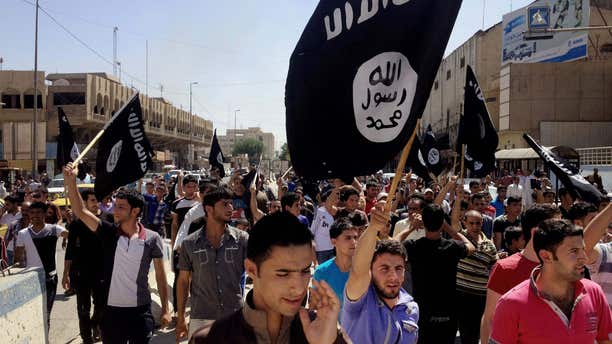 FILE - In this June 16, 2014 file photo, demonstrators chant pro-Islamic State group slogans as they carry the group's flags in front of the provincial government headquarters in Mosul, Iraq. (AP)

The Iraqi military backed by U.S.-led coalition aircraft on Thursday launched a long-awaited operation to recapture the northern city of Mosul from Islamic State (ISIS) militants, a military spokesman said.

In the push, Iraqi forces retook several villages on the outskirts of the town of Makhmour, east of Mosul, early in the morning on Thursday and hoisted the Iraqi flag there, according to the spokesman for the Joint Military Command, Brig. Gen. Yahya Rasool.

It was not immediately clear how long such a complex and taxing offensive would take. Only recently, Iraqi and U.S. officials refrained to give a specific time on when the Mosul operation could begin, saying it would take many months to prepare Iraq's still struggling military for the long-anticipated task of retaking the key city.

Some U.S. and Iraqi officials have said it may not even be possible to retake it this year, despite repeated vows by Iraqi Prime Minister Haider al-Abadi.

Rasool told The Associated Press that the U.S.-led international coalition was providing air support but would not divulge more details on the offensive, which he said was dubbed "Operation Conquest."

Rasool's declaration came only few days after the United States announced that it has set up a small Marine artillery outpost in northern Iraq to protect a nearby Iraqi military base in Makhour.

On Saturday, the militants fired to rockets at the base, killing a U.S. Marin and wounding several others.