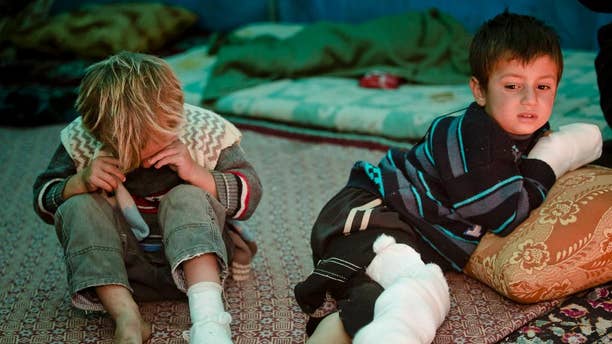 Mahmut Munir, 8 years-old, right, a Syrian Kurdish refugee boy from Kobani and his 5 year-old brother Mahmut, left, who were injured along with other family members in a mortar attack by forces of the Islamic State group sits in a tent at a camp in Suruc, on the Turkey-Syria border Wednesday, Nov. 19, 2014. Kobani, also known as Ayn Arab, and its surrounding areas, has been under assault by extremists of the Islamic State group since mid-September and is being defended by Kurdish fighters. (AP Photo/Vadim Ghirda) (The Associated Press)

Iraq's prime minister says his country and neighboring Turkey have agreed on closer security and intelligence cooperation in the face of the threat posed by the extremist Islamic State group.

About a third of Iraq, which shares a porous border with Turkey, is held by the Islamic State group that earlier this year declared a caliphate on the large swaths of territory under its control in both Iraq and Syria.

Relations soured between the two neighbors recently over what Baghdad sees as illegal oil exports by its Kurdish self-ruled northern region through Turkey.

Al-Abadi says the two countries have reached an agreement on the issue but did not elaborate.