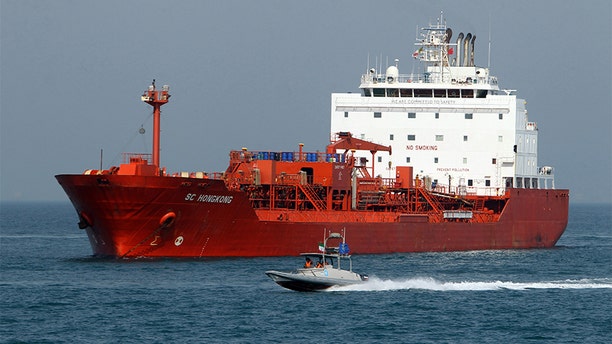 The U.S. says Iran has halted the harassment of U.S. naval vessels in the Persian Gulf by boats like this Islamic Revolutionary Guard Corps speedboat. (AFP)

The Iranian military has halted the routine harassment by its armed “fast boats” of U.S. naval vessels in the Persian Gulf, the U.S. military said, a turnabout that officials welcomed but were at a loss to explain.

The boats for at least two years would dart toward the U.S. vessels as they passed through the Persian Gulf, risking miscalculation, but haven’t done so for five months, U.S. military officials said.

The officials said they hoped the respite would continue. “I hope it’s because we have messaged our readiness…and that it isn’t tolerable or how professional militaries operate,” Army Gen. Joseph Votel, who heads U.S. Central Command, told reporters traveling with him in the Middle East this week. Iranian officials didn’t respond to a request for comment.

The fast boats, typically armed with .50 caliber machine guns and rocket launchers, have come within shooting distance of American naval vessels, encounters that grew routine even though each one presents potential dangers to American vessels transiting through international waters.

In some of the more serious incidents, Iranian crews have directed spotlights at ship and aircraft crews, potentially blinding pilots as they conduct operations, according to U.S. military officials. In one case, an Iranian boat pointed a weapon at an American helicopter flying off a Navy vessel, officials said. In the most serious incidents, U.S. vessels have fired warning shots in return.