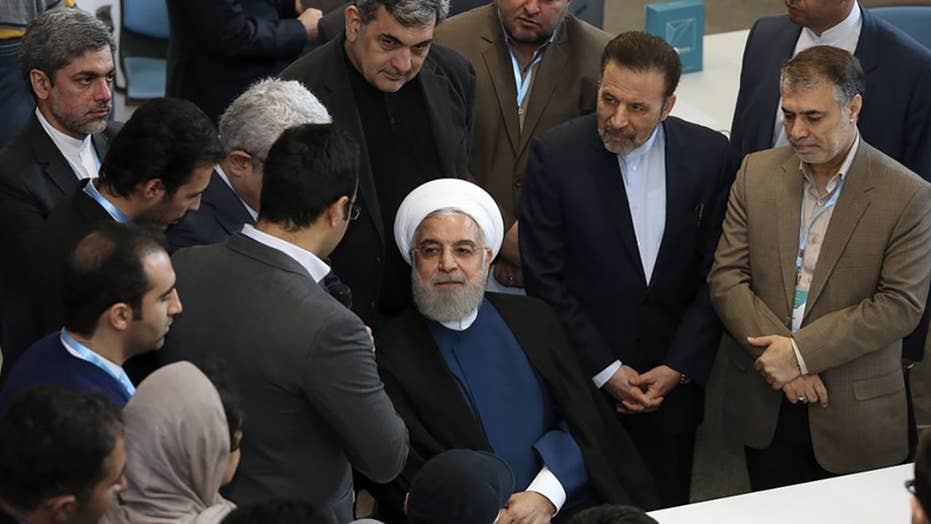 Iran on Thursday said it blocked a United Nations inspector from entering a nuclear site last week because she tested positive for traces of explosive nitrates -- a claim the International Atomic Energy Agency (IAEA) disputed.

The allegation made by Iranian representative Kazem Gharib Abadi at a meeting of the IAEA in Vienna came as Iran injected uranium gas into more centrifuges at its underground Fordo nuclear complex early Thursday -- the most-significant step away from its 2015 nuclear deal with world powers.

The Oct. 28 incident with the inspector happened at Iran's Natanz nuclear facility. The entrance of Natanz includes equipment to check for traces of nitrates, Abadi said.

"The detector's alarm went off and it was signaling to a specific person," he said. "They have repeated this procedure again and again, and unfortunately, the results were the same all the way for only that specific inspector."

As they waited for an employee to search the inspector, the woman went off to the bathroom. Abadi alleged that when she came back, she no longer tested positive. He said the team took samples from the bathroom and seized her handbag. Abadi said he hoped further tests by Iran and the IAEA would explain what happened.

"Iran, like all other members of the agency, cannot condone any behavior or action which may be against the safety and security of its nuclear installations, especially ... considering the past sabotage attempts in its nuclear facilities," Abadi said.

The IAEA issued a rare statement disputing Abadi's account. The agency also said it will "consult with Iran with a view to clarifying the situation.”

A truck containing a cylinder of uranium hexafluoride gas leaves the Ahmadi Roshan uranium enrichment facility in Natanz to travel to the Fordo nuclear facility.  (Atomic Energy Organization of Iran via AP)

Nitrates are a common fertilizer, but when mixed with proper amounts of fuel, the material can become an explosive that's as powerful as TNT. Swab tests, common at airports and other secure facilities, can detect its presence on skin or objects.

TWO MEAN PLEAD GUILTY TO ACTING AS IRANIAN AGENTS IN US, SPYING ON AMERICANS

Meanwhile, Iran began to inject gas into centrifuges after midnight at Fordo, a facility built under a mountain north of the Shiite holy city of Qom, the Atomic Energy Organization of Iran said.

Fordo's 1,044 centrifuges previously spun without uranium gas for enrichment under the nuclear accord, which saw Iran limit its uranium enrichment in exchange for the lifting of economic sanctions.

A U.N. official from the IAEA witnessed the injection, Iran said. The centrifuges will ultimately begin enriching uranium up to 4.5 percent, which is beyond the limits of the nuclear deal, but nowhere near weapons-grade levels of 90 percent.

Iran’s latest steps put additional pressure on Europe to offer Tehran a way to sell its crude oil abroad, despite U.S.-imposed sanctions on the country since President Trump withdrew the U.S. from the nuclear deal last year.

Experts have suggested that the limits imposed under the 2015 deal, when obeyed, meant Iran would need a year to gather enough material to build a nuclear weapon if it chose to do so -- a time known as a "breakout period."