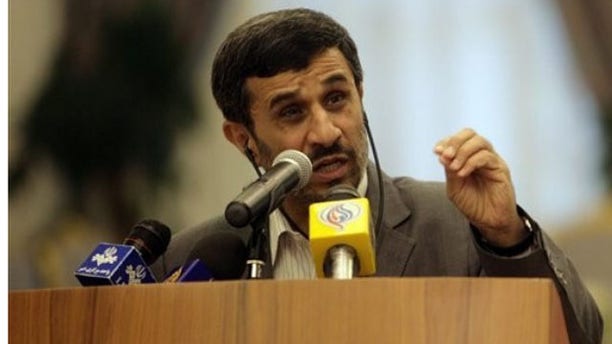 Sept. 5: Iranian President Mahmoud Ahmadinejad speaks during a joint press conference with Qatar's emir, Sheikh Hamad bin Khalifa al-Thani, unseen, at the royal palace in Doha, declaring that any attack on the Islamic republic will result in the destruction of Israel (AP).

DOHA, Qatar -- Iran's president said Sunday that any Israeli attack against his nation would mean the destruction of the Jewish state.

The two nations have exchanged numerous threats and warnings in the confrontation over Iran's nuclear program, which Israel, the United States and other countries believe is aimed at developing weapons, despite Tehran's denials.

"Any offensive against Iran means the annihilation of the Zionist entity," Iranian President Mahmoud Ahmadinejad said during a visit to the Persian Gulf nation of Qatar. "Iran does not care much about this entity because it is on its way to decay."

He said he doubted Israel or the U.S. would dare to stage such an attack because "they know that Iran is ready and has the potential for a decisive and wide-scale response."

At the same time, Ahmadinejad sought to ease concerns among neighboring Arab nations that Tehran could target them if armed conflict were to break out with the West over its nuclear work.

Many of Iran's Sunni Arab neighbors, some of which host U.S. bases, fear that Tehran could attack them if such a conflict were to break out.

Ahmadinejad, who met with Qatar's leader during Sunday's visit, said there is a need for reconciliation and cooperation between Shiite-dominated Iran and other Gulf nations.

U.S. military chief Adm. Mike Mullen said last month that America's military has a plan to attack Iran, although he thinks a military strike is probably a bad idea. Still, he said the risk of Iran developing a nuclear weapon is unacceptable and he reiterated that "the military option" remains on the table.

Iran's Supreme Leader Ayatollah Ali Khamenei warned Wednesday that Iran's response to an attack would not be limited to the region, suggesting Iran would target U.S. interests beyond the Persian Gulf.