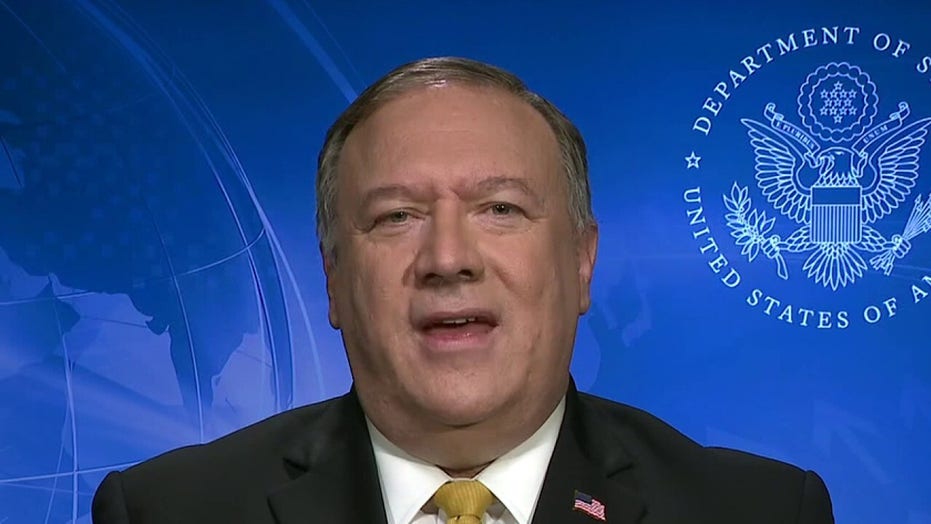 Secretary of State Mike Pompeo breaks down 'snapback' sanctions on Iran and says the U.S. will hold nations accountable who violate current sanctions

Iranian state TV announced Thursday that the nation has unveiled two new missiles, one named after a top Iranian military official killed by a U.S. drone strikes this year.

Iran celebrated their National Defense Industry Day by revealing a new 870 mile range missile, the “Martyr Hajj Qassem,” which was named for Gen. Qassem Soleimani. The other, a naval cruise missile with a 620 mile range was named the “Martyr Abu Mahdi,” after Iraqi militia leader Abu Mahdi al-Muhandis, who had close ties with Iran.

Muhandis was killed in the same January drone strike that killed Soleimani.

TRUMP ADMINISTRATION TO TRIGGER ‘SNAPBACK’ OF UN SANCTIONS ON IRAN: WHAT DOES IT MEAN?

The announcement follows the United Nations Security Council vote which failed to extend an arms embargo on Iran that expires in October.

Only the Dominican Republic backed the measure, China and Russia voted against it and 11 out of the 15 member nations abstained from voting altogether.

“Missiles and particularly cruise missiles are very important for us," Iranian President Hassan Rouhani said according to Reuters. The fact that we have increased the range from 300 to 1,000 in less than two years is a great achievement.”

The Iranian missile programs are defensive, he said.

Tensions between Washington and Tehran have been high since President Trump pulled out of the Iranian Nuclear Deal in 2018. Trump has claimed that the Obama-era deal was a waste of money and that Iran did not hold up their end of the bargain.

Because the arms embargo will not be extended, Secretary of State Mike Pompeo requested Thursday, that the U.N. restore sanctions on Iran – a policy referred to as the so-called snapback because it would restore sanctions that had been imposed before the deal to limit Iran's nuclear program had been reached.

POMPEO VOWS US WILL SANCTION RUSSIA, CHINA IF THEY OPPOSE TRUMP'S 'SNAPBACK' OF UN'S IRAN SANCTIONS

“It’s a snapback. Not uncommon,” President Trump said Wednesday during a press conference.

“Iran has repeatedly violated the arms embargo by proliferating weapons to its partners and proxies throughout the Middle East region,” Pompeo wrote to the U.N. Thursday. “In addition, Iran has repeatedly defied the Security Council’s call on it to not undertake any activity related to ballistic missile technology.”

It is unclear how the U.N. member states are going to react to the call for snap-back sanctions, though Russia and China have already said they will not support the measures.

Iran has also said they will not conduct any talks regarding their nuclear and ballistic missile capabilities as long as the sanctions stay in place.