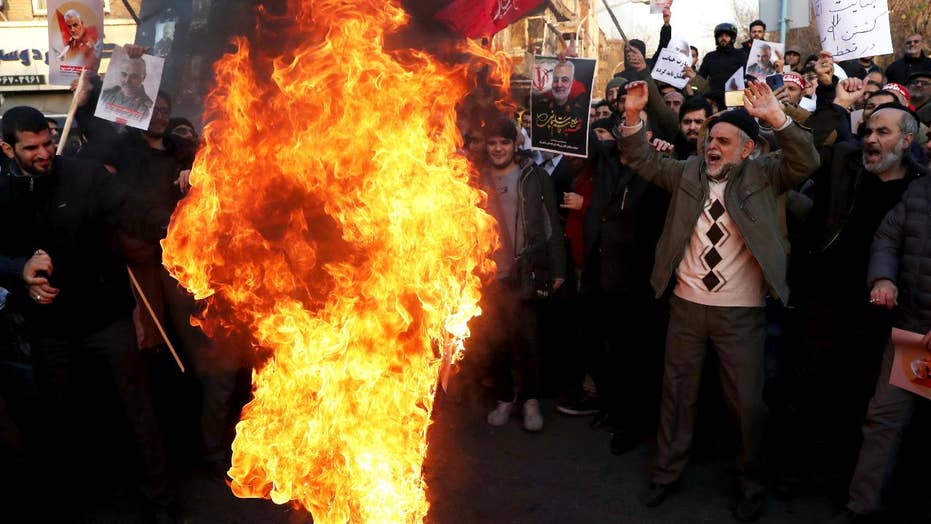 The rhetorical war over Iran

Last week in the Kurdish-Iranian city of Kermanshah, an 18-year-old pregnant woman was forced to consume aluminum phosphide by her father and brothers in what human rights activists have deemed a brutal "honor" killing.

Somayeh Fathi was allegedly poisoned for "having a relationship with another man and dishonoring her family," the U.K.-based Iran International reported.

To date, according to local reports, nobody has been held accountable for the poisoning of taking the life of the young woman and her unborn child.

The chilling incident highlights the prevalence of apparent honor killings that Iran has seen in June alone. There is no clear indication if the cases in June suggest a spike in such killings, however, experts say a spotlight has shined on them more brightly thanks to social media.

"Over the past few weeks, there have been at least six publicly documented cases of so-called 'honorary killings' in Iran," Nargess Tavassolian, a journalist at Iran International TV, told Fox News. "With the traction of social media platforms, more news of these crimes have come to light, but do keep in mind that many times these crimes are not reported, and they do not find their way into the media. Parvaneh Salahshouri, a former MP, says there have been at least 10 cases of honorary killings in Iran recently."

On the evening of June 16 in the city of Abadan, a man turned himself in to authorities some five days after fatally stabbing his sister in the neck and chest over rumors she was having "an illicit affair and betraying her husband."

In the same city just days earlier, 19-year-old Fatemeh Barhi was beheaded by her husband and cousin – her body dumped by the riverside – only two days after running away with a man who helped her escape a forced marriage a year earlier. The husband also handed himself over to police, all while wielding a bloody knife.

19-year-old Fatemeh Barhi was beheaded by her husband and cousin – her body dumped by the riverside – only two days after running away with a man who helped her escape a forced marriage a year earlier. (Iran International)

Moreover, on June 17, Reyhaneh Ameri, 22, was slain by her father in the city of Kerman – belted over the head with an iron pole and left to bleed to death.

n June 17, Reyhaneh Ameri, 22, was slain by her father in the city of Kerman – belted over the head with an iron pole and left to bleed to death. (Iran International)

And then there is the case of 13-year-old Romina Ashrafi, who was beheaded by her father with a sickle while she slept in her family home for merely wanting to "elope with an older lover."

Weeks before allegedly decapitating his young daughter, the 37-year-old father is reported to have sought legal counsel about what kind of punishment he would be facing and was assured that as the girl's guardian he would not be handed a death penalty, but would most likely be sentenced to three to 10 years behind bars.

13-year-old Romina Ashrafi, who was beheaded by her father with a sickle while she slept in her family home for merely wanting to "elope with an older lover." (Iran International)

With such little at stake, the father went ahead with the grim deed, subsequently setting off an angry reaction from women and children's rights activists and raising red flags over the fragility of the legal systems to protect them.

Adding to the failures was the notion that Ashrafi had run away days earlier, sparking an intense search, and when spotted told authorities that she feared to return home due to her violent father, who had threatened to kill her numerous times before.

According to Amnesty International, so-called "honor violence" – typically carried out by male relatives in a twisted bid to reclaim family "honor" – happens when a woman or girl is accused or suspected of "engaging in behavior that could taint her family's status," and generally involves murmurs of infidelity or contact with a male not sanctioned by males in the family.

"Women's bodies, particularly, are considered the repositories of family honor, and under the control and responsibility of her family, especially her male relatives," Amnesty notes. "And large sections of society share traditional conceptions of family honor and approve of 'honor' killings to preserve that honor."

Nonetheless, experts say that for every illuminated case, there are still many more than are swept beneath the rug.

"We fear that there are other unreported cases every year. Women and girls in Iran face domestic violence on a widespread basis, and the Iranian authorities have consistently failed in their obligations to protect the lives and safety of women and girls," said Raha Bahreini, the Iran Researcher at Amnesty International. "Iranian authorities have yet to adopt specific legislation criminalizing gender-based violence against women and girls, including domestic violence, marital rape, and early and forced marriage, all of which remain widespread."

In 2019, the judiciary heavily watered down a bill aimed at protecting women and girls against violence during its review and subsequently sent it to the government's bills committee for review in September 2019, where it remains.

"This bill has been stalled for over a decade. Outrageously, the authorities' responsibility for these killings goes beyond their failure to adopt proper laws, policies, and practices to adequately protect women and girls from violence," Behreini continued. "In fact, the Iranian authorities endorse the commission of violence against women and girls through various abusive and discriminatory laws, and grant impunity to perpetrators."

In the midst of recent public outcry, Iran's President Hassan Rouhani asked Parliament to move faster on legislation – which has been languishing for eight years – to criminalize "emotional, sexual and physical abuse and impose jail time for violators," but remains unclear what impact more legislation will have without a more in-depth probe of social norms within the country.

While there is no official data pertaining to honor killings in Iran, internal news agency ISNA estimates that an average of 350 to 450 honor killings occur in the Islamic Republic every year. The agency's study found that almost 20 percent of all homicides in Iran – and at least half of murders committed by a family member – are honor killings.

Under the Sharia law "an eye for an eye" provision, murder is punishable by death; however, the penal code offers exemptions for the killing of a child by the legal guardian – generally the father or paternal grandfather.

"Men who assault or even kill their wives are excluded from the punishments ordinarily applied to such crimes if they prove that they did so while their wife was involved in the act of adultery," Behreini lamented. "Fathers or paternal grandfathers who kill their children or grandchildren are not subject to proportional, which may exacerbate the risk of 'honor crimes' against girls and women."

Behreini continued: "The Iranian authorities also criminalize the work of women's rights defenders, subjecting them to harassment, arbitrary arrest and detention, torture and other ill-treatment, and unfair trials resulting in lengthy prison sentences. They also heavily crackdown on the civil society and prevent civil society activists from establishing crisis centers and emergency shelters which would provide life-saving support to women and girls."

Behreini emphasized that it is the role of the international community, including the EU and EU member states that are in human rights and political dialogues with Iran, to call on the Iranian authorities to end the impunity for violence against women and girls, and to criminalize domestic violence, including child marriage and marital rape.

While Iran is considered to be one of the world's leaders in honor killings, the problem is one that spans almost every pocket of the planet – including the United States and Europe.

The United Nations estimates that around 5,000 women and girls are murdered each year by members of their families. In many countries, Amnesty International highlights, "the punishment for 'honor' crimes are inadequate or non-existent—laws either do not recognize 'honor' crime or have insufficient sentencing for such crime."

And all too often when laws are on the books, activists say, they routinely go unenforced.