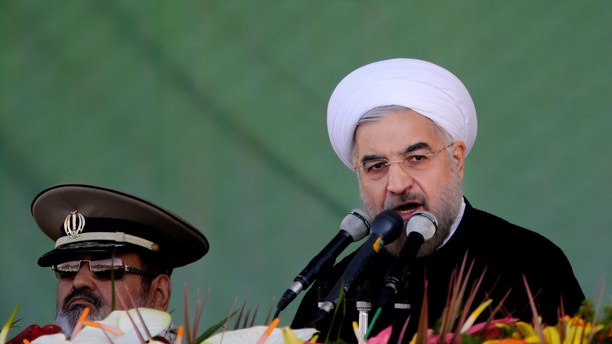 Sept, 22, 2013 - Iran's President Hassan Rouhani, gives a speech during an annual military parade in Tehran, Iran, on the eve of landmark trip to gather alongside Western leaders. Rouhani offered his most expansive vision that a deal to settle the impasse over Tehran's nuclear program could open doors for greater cooperation on regional flash points such as the Syrian civil war. (AP)

Iran said Monday it had freed 80 prisoners arrested in political crackdowns, offering another potential diplomatic boost for the country's new president and his outreach to the West at this week's U.N. gathering.

The announcement of the mass release came just hours after Hasan Rouhani departed for New York for the annual U.N. General Assembly, where he is expected to seek Western pledges to restart stalled talks over Iran's nuclear program.

It appeared to reinforce the impression that Rouhani has support from the country's Supreme Leader Ayatollah Ali Khamenei to explore a broad rapprochement with the West, which has condemned Iran's crackdowns on the opposition.

Before leaving, Rouhani urged Western leaders to heed his appeals for greater dialogue and take steps to ease economic sanctions on Iran as a path to "reach joint interests." Rouhani has repeatedly appealed to the U.S. and allies to roll back sanctions to move ahead negotiations.

The official IRNA news agency said Khamenei agreed to a request from the judiciary to release the opposition supporters and others jailed on security charges. Khamenei has apparently backed Rouhani's attempts to repair ties with the West and possibly open groundbreaking dialogue with Washington.

Rouhani was quoted by IRNA as saying the West should choose the "path of interaction, talks and leniency, so we can reach joint interests." He also called sanctions "unacceptable and illegal" and a roadblock to progress on settling the nuclear impasse.

"The Iranian nation is a lover of peace and culture and it is after progress without any causing damage to other countries," said Rouhani.

Rouhani's U.N. visit has raised speculation on possible breakthrough in relations with the United States, which broke ties with Tehran after the storming of the U.S. Embassy in late 1979. A total of 52 hostages were held 444 days.

But some Iranian conservatives are questioning the outreach. A commentary Monday in the hard-line Kayhan newspaper warned that shaking hands with President Barack Obama would be a "big mistake" and would represent a concession to Washington without any direct benefit for Iran.

Kayhan called Obama a "war criminal" for the U.S. military presence in Afghanistan and its bases in the Gulf and elsewhere in the region. "This is the same evil hand that singed economic punishments against Iranian nations," it said.

On the other hand, the website of former President Akbar Hashemi Rafsanjani released part of his comments during an interview with a local quarterly. He said that frozen relations between the United States and Iran cannot be continued indefinitely.

"The method that we have now -- no talk and no relations with the U.S. -- cannot be continued," said Rafsanjani. He said there is no difference between the U.S. and Europe, China and Russia, which Iran has relations. "Why shouldn't we talk with the U.S.?" asked Rafsanjani, who supported Rouhani during his presidential campaign.

Mohammad Ali Abatahi, a vice-president under former reformist President Mohammad Khatami, told pro-reform Etemad daily he does not expect an official meeting between Rouhani and Obama, but noted that the U.N. gathering could help in the effort to reduce sanctions against Iran.

But Mahdi Hojjat, deputy head of Iran's cultural heritage department, said a meeting between the two presidents is likely.

For the next two years, some Russian technicians will serve in advisory roles at the reactor.