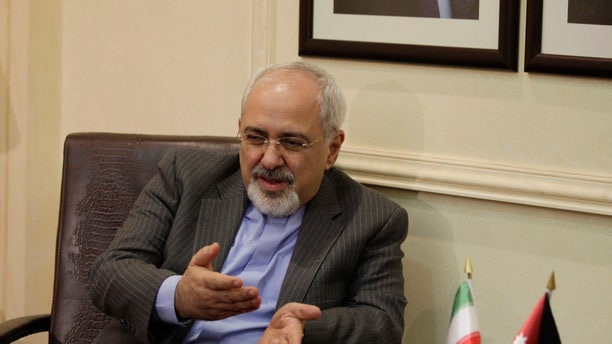 Iran is President Bashar Assad's strongest regional ally, extending him billions of dollars in credit since the crisis began in March 2011. The United States, Saudi Arabia and other countries in the Persian Gulf suspect Tehran is also shipping him weapons.

The U.N., which is hosting the talks, has not yet invited Iran to attend, although a final decision has yet to be made. The prospects for success at the talks appear slim at best, however.

Assad warned against what he described as the dangers of Saudi Arabia's brand of purist Islam, telling SANA: "Wahabi ideology now threatens the whole world, not only regional states."

"The Syrian people and others in the region now know the dangers of this terrorist ideology and everyone should participate in confronting and eradicating it," Assad was quoted as saying.

The agency quoted Zarif as saying that "countries of the region should unite to confront the challenges and fight terrorism in order to achieve security and stability."

In 2012, the chief commander of Iran's powerful Revolutionary Guard, Gen. Mohammad Ali Jafari, said the unit had high-level advisers in Syria but denied it has fighters there. More recently, however, analysts say that Iranian troops and commanders have taken on a more direct role in the conflict.

In November, Iran's semiofficial Mehr news agency said a commander in the Guard had been killed in Syria. It said Mohammad Jamali was killed by "terrorists" a few days ago but did not provide details.

Elsewhere in Syria, activists reported violence in different areas including the northwestern province of Idlib, where a local commander of the Al Qaeda-linked Islamic State of Iraq and the Levant was killed by members of a rival rebel group.

The Britain-based Syrian Observatory for Human Rights said the ISIL commander in the town of Saraqeb was a Belgian citizen of Algerian origin and was killed along with another foreign fighter when they were ambushed by a rival rebel group.

Hundreds of people have been killed over the past two weeks in fighting between ISIL and other Islamic groups in northern and eastern Syria.